Baja flavors next to Petco Park

Lunch at San Diego’s East Village restaurant, Comun Kitchen and Tavern was as exciting as the food. Special Chef Chad White just happened to be grilling fresh corn for his savory elote appetizer and we struck up a conversation while he worked over a hot flame. Chef Chad believes in sustainable and organic foods that become “real and honest” plates for his urban seeking diners. His other restaurant is La Justina in Tijuana and both eateries take Baja cuisine to a new dimension. Fresh produce is a priority and his walk-in frig is organized like Celine Dion’s shoe closet! 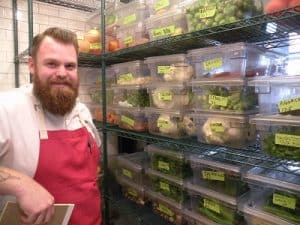 We had the Borrego tostada layered with beans, roasted lamb leg and Queso Oaxaca and the highly recommended ceviche tostada prepared with yellowtail, tomato, jalapeno and avocado. Light and delicious, ending with Cajeta choco flan topped with chipotle peanut brittle. Chef said there’s a new flan about to be revealed and I’ll look forward to that next time. 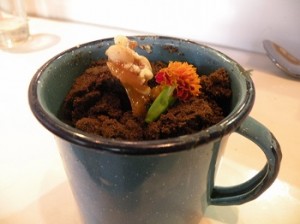