Big Kitchen Café a blast from the past 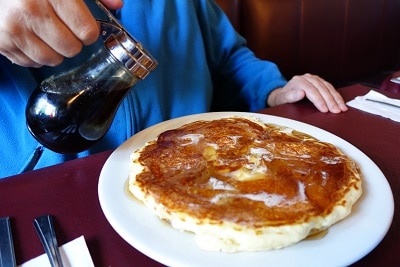 Before Golden Hill became trendy South Park, there was The Big Kitchen Café. In all the passing years, it hasn’t lost its funky, hippy, political character. One look inside and you realize how Whoopi Goldberg fit right in as a dishwasher and waitress in her younger days.

The restroom is outside and the furniture is outdated and shaky. But, the food is still large, filling and made by a chef who I wouldn’t argue with. I asked what the unique spices were on the fried potatoes and the waitress said, “love spices”. I don’t even want to know!  But I do know the pancakes are so big, its hard to eat even half of one. And the biscuits are smothered in gravy and so rich and creamy.