Burger Week was good and juicy

San Diego’s annual burger week was a big temptation of burgers and fries.  With many restaurants participating, I narrowed it down to three independent burger joints.

First on the list was Cali “O” Burgers in Hillcrest. I looked over the menu and realized La Jolla and Fallbrook are both lovely places, but wait, they’re a juicy entrée named after San Diego cities.  The La Jolla had Applewood smoked bacon, sautéed mushrooms, Swiss cheese and grilled onions.  For those not wanting beef, the Fallbrook was a turkey burger with Swiss cheese and avocado.  Each selection was packed with flavor. 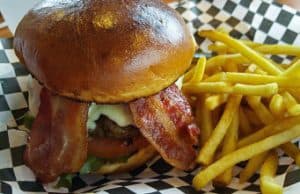 Owner Mike told me, Cali “O” stands for California Organic Burgers. He insists on buying beef, turkey and chicken from sustainable farms, and delivered daily are locally sourced breads and produce. Even the elk and bison have no hormones or additives. Maybe next time I’ll give the organic quinoa veggie burger a try as long as it comes with the thick sidewinder fries! #CaliOBurgers 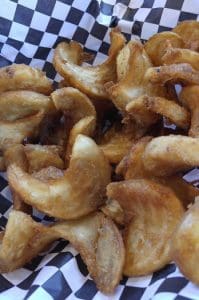 Looking over the list of places to get the $6 burger, it was time to try Craft and Sea in North Park.  Owner Albert showed us the menu and besides burgers, several menu items called out. But first, the OMBurger.  It’s dressed up with craft beer cheese sauce made of American and Fontina cheese and topped off with an IPA. Messy goodness!  A tasty appetizer was tempura avocados, just like the name sounds, rather addicting. And hand pressed tortillas give authentic flavor to the chicken chipotle taco.
Hard to believe the building is 100 years old with its open and airy feeling.  #CraftandSea 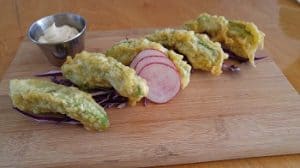 Who knew a hole in the wall bar or rather a neighborhood bar on 5th Ave in Hillcrest has won awards for its burgers.  The Balboa Burger Bar and Grill owner Tom explained how his burgers have been recognized in National cook offs. He won the local Culinary Fight Club which led to competing in the World Food Championship. His Balboa Burger loaded with bacon, jalapenos and avocado scored high and now the word is out and the line is long for this burger joint. If you want to try this burger, ask for the “Semi-Finalist” along with the Kennebec fries too, regular and garlic. #Balboaburgerandgrill 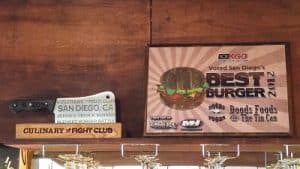 The Balboa Bar and Grill