Can there be any better bread than in France? 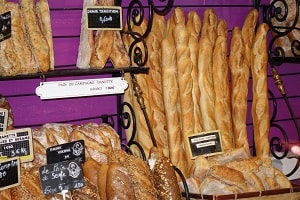 What would France be without their famous breads? One could do an entire trip learning about the breads, the process and notably, the awards bakers strive to win.
Average consumption is nearly a baguette a day for each person and when it’s vacation time in August, by law, certain boulangeries must remain open. Poilane has a long history in Paris and uses sourdough. Humm, not like San Francisco sourdough, subtle and just enough in the round loaf with its signature ‘P’.
“Art…isan” bakeries make breads on premises and the second picture won the 2013 award for best Artisan breads.
2014, Aux Delices de Palais won best baguette against much professional competition. With the award, he supplies the French president for a year of the best bread.
When choosing bread, one must smell it and press it in the middle to hear a crunch knowing it’s fresh. Quite different than buying bread in the grocery store at home! 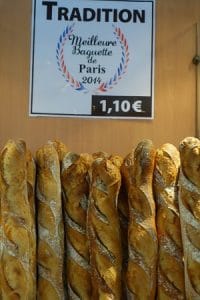