Charleston, South Carolina filled with charming houses, a coastal setting and scrumptious foods. Southern foods, as I’ve been told, are even better when made with 2 sticks of butter!

One can’t eat in the south without a plate of shrimp and grits. Because of the many cultural influences over the years, this shrimp and grits had a zing to it. The chef at Carolina Cooks added hot sauce and spices, and then more cream. The grits were silky smooth and carried the shrimp into a satiating meal. 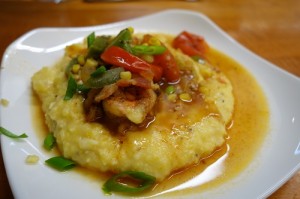 I keep learning about Southern history and the lesson I learned is, pralines are as popular here as Louisiana. Charleston is proud of their sugary sweet delights loaded with pecans. Since each shop offers samples, it’s a good way to decide which pralines are the best (until the sugar coma kicks in). I honed in on River Street Sweets for my final selection. 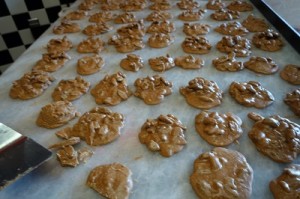 And not eating biscuits and gravy just wouldn’t be fitting in the South. Dixie Diner and Supply was featured on Diners, Drive-ins and Dives and it’s a very small café known for the best tomato pie. For my breakfast it was the well-known State Street Biscuit, hand breaded fried chicken, sausage gravy, egg, cheese and biscuit.

Ah, the South is rising again on the food scene!