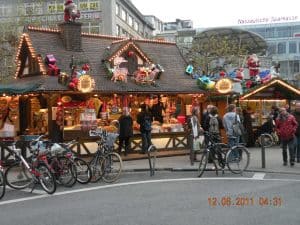 After packing and repacking while trying to pack light, I finally zipped the suitcase and said I’m done!  I have a ceremonious dance I do around the suitcase hoping in some way, I know exactly how much of what to pack.  It would seem 7 days means 3 pants, 3 shirts and socks, that’s it.  Not mysterious but why is it so difficult to pack?  Someday I hope to be one of those travelers that packs a carry-on in 15 minutes and then leaves for the airport.  Someday!

I love to fly business and first class and I have a special deal on British Air to fly Traveler Plus which is in between coach and business.  I inquired if there were rates to upgrade to business since the plane isn’t near full but I decided I better save my money for the Christmas markets.  It hurts not to fly in the manner I’m accustomed to.

While waiting in the airport to board, the entire British Airways crew walked through the gate area in single file, dressed professionally and with a determined walk walked down the ramp to the plane.  The women wearing hair swept up under their tilted hats, scarfs around the necks and make-up perfectly applied had such a polite demeanor I knew it would be an enjoyable experience.

The flight from San Diego to London went smoothly and traveler plus had some good points, the seats were comfortable except the the reclining part didn’t have good extensions for legs.  The meal was delicious with filet Mignon and raviolis filled with butternut squash and layered with a white cream sauce.  Hot towels before the meal were a nice touch.   Wine and coffee flowed and before I knew it the 10 hours was over and we looked for our gate for next flight to Frankfurt.   It’s nice when travel plans go well!

Previous postChocolate Quest in Tallinn, Estonia Next postScissors and soup in Frankfurt