Before the days of paparazzi chasing celebrities, a British/Scottish pub in Glendale was the drop in pub for Mary Pickford, Tom Mix, John Wayne and Walt Disney.  Tam O’Shanter, opened in 1922, was originally owned by Lawrence Frank and Walter Van de Kamp (the bakery with blue windmills on the packages).  Walt Disney patronized there in the 1930’s and 40’s and became friends with the owners.  Disney sat at table #31 and it’s said, he got inspiration for Snow White from the building. 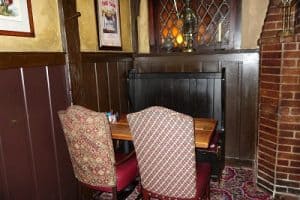 There is just about every clan tartan hanging among the decor and the 2 sketches in the entrance are not to be missed. Disney had a sketch made of Lawrence in 1958 and it’s signed, Disney and staff. On the opposite wall is another sketch from Disney Studios in celebration of Tam O’Shanter’s 75th anniversary.  Notice the Mickey characters and the Lawry’s seasoning salt containers. Lawrence also owned Lawry’s Prime Rib restaurant but that’s another story.  If you visit “tam” you just may see some retired Disney animators having lunch and talking about the old studio days. 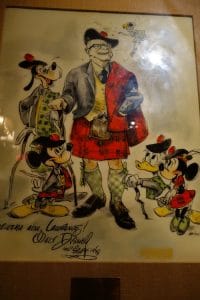