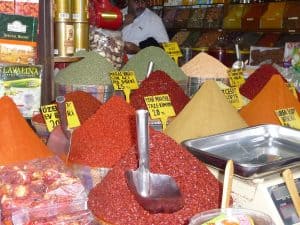 Making my way through crowds of people slowly walking, talking on cell phones and holding shopping bags, I found the mounds of spices in the marketplace in Istanbul, Turkey.

I’d arrived to buy various spices in this legendary market known as the Egyptian Market, which conjured up stories of ancient spice routes. With centuries of bustling activity around the Golden Horn port connecting Europe and Asia, commerce spread throughout the West, expanding trade routes as far as the New World. Istanbul’s allure as a center of trade is still active today.

Bins of colorful spices were shaped high like mini-pyramids in many of the narrow stalls along the main walkway. I finally chose Inanc Baharat in stall number 39, probably because of his engaging personality and the way he honed in on American tourists. The talkative, energetic man informed me that he’s known as “Spice Boy.”

I showed him my list of must-buy spices and he quickly led me from container to container, saying, “Lady, taste this spice, mine are the freshest.”

He loaded plastic bags with more than I requested and then vacuumed-sealed each one. Good thing I remembered to have him write the names of turmeric, paprika, black peppercorns, Turkish pepper, sumac, red chili flakes and curry on each bag. Stealthily, he slipped in a bag of an unknown mixture and I felt like I had just been jostled at the carnival.

Paying the Price for the Spices

The grand price was $130 cash; noticing me taken aback, he repeated, “Lady, these are the freshest spices,” and then gave me a gift of Turkish Viagra, which got a big laugh. Contemplating whether I paid too much, I decided it was worth it – those back home would be delighted by the flavorful spices.

And that they were. I gathered friends and family and spread out all the bags. No one could resist sniffing the multi-colored gems and rubbing them to release aromatic oils. All were in awe of the magical elements known to have healing properties and enliven the senses.

Excitedly, one friend said she’d make curry chicken, another roasted lamb. We experimented in our home kitchen cooking various dishes and there were fabulous aromas. It was as if the bags were filled with gold and frankincense. They later commented that the combination of flavors and scents turned their food into special dishes. It was worth the price to bring such treasures of the ancient world to friends’ kitchens.

A pinch at a time, the historic Spice Route has lasted through the ages.