River Cruising Through The Netherlands and Belgium

I saw the AMA Waterways ship moored early at the dock in Amsterdam and stepped on board.  It was just the beginning of sailing for 7 days with tulip and chocolate anticipation. 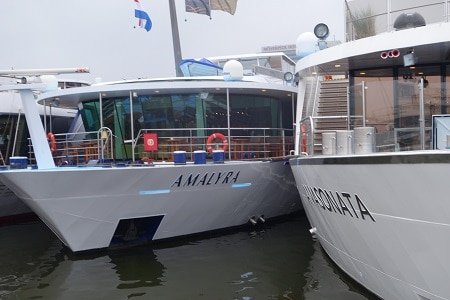 Seven days ahead of river cruising and I was ready to partake of as much as possible, and why not? It was vacation and more highlights were about to unfold. Usually boarding a ship begins in the afternoon, but I saw the AMAWaterways ship moored early at the dock in Amsterdam and stepped on board.

Vibrant tulips, buttery coffee cakes and local wines were just the beginning as I was welcomed on board Smiling staff offered to take my luggage and told me to make myself comfortable in the lounge. That’s where I homed in on the good things to come. 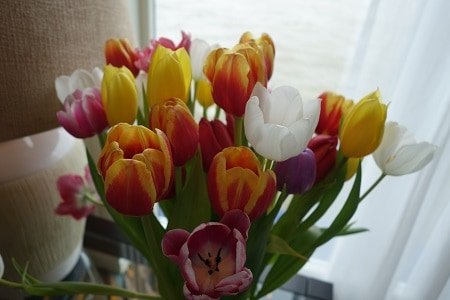 Fellow passengers trickled in, some tired from a long day of travel and soon the relaxation factor took effect. Later in the afternoon, two women sipping wine and nibbling on cheese became excited as the ship pulled out from the dock and we were on our way.

The Difference from a Big Ocean Ship

The movement of the ship was barely noticeable as the waters were smooth and calm on this “Tulip Time” river cruise.  Different than a mega ship with passengers crowded around, river cruises have fewer than 180 passengers and shipmates get to know each other in an informal manner.

Centuries-old windmills and colorful flowers dotted the landscape, but most on my mind was the chocolate tour in Ghent, Belgium.  An added bonus was the storybook town of Bruges after Ghent, making for a full day of dreams come true.  Staff from the ship escorted our small group to waiting motor coaches and right on time we began our much-anticipated journey for the day.  First stop was Ghent, and as our tour guide walked us through the enchanting town, my nose detected sweet aromas.

Not surprisingly, first up was the Van Hecke Chocolate Shop.  Walking past displays of pastries and confections, we gathered in the narrow kitchen and Master Chocolatier Florent Van Hecke introduced himself while he skillfully added the finishing touches to a tray of filled sponge cakes. 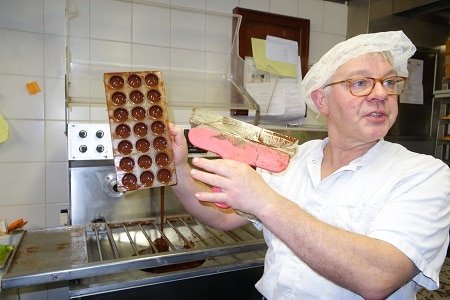 His son Stephen quickly filled molds from simmering vats of luscious chocolate and explained the process of chocolate making to our group. Dazzled by the tasty samples passed around, we were now in a sugary trance.

Lace and Swans in Bruges

Medieval Bruges, with its fairy tale and undisturbed charm, looked every bit as I imagined from pictures and movies. Red-and-brown gingerbread buildings faced inward around the cobblestone market square and the 13th-century belfry stood out as a landmark. Exquisite lace shops lined the streets as I walked up and over one of the many arched bridges and boarded a boat for a canal ride in “the Venice of the North”. The ship’s captain pointed out graceful white swans gliding on the water and then jokingly told us to mind our heads as we passed under a low bridge. 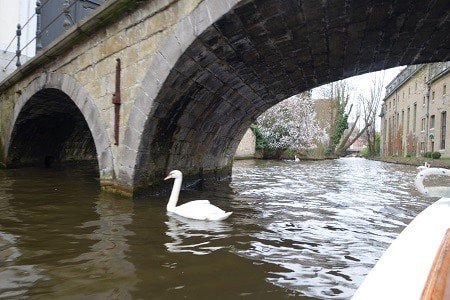 The bus ride back to the ship was full of contented tourists just like me.

Chef’s Table for a Special Dinner

Being in holiday mode, I almost forgot I had signed up for the chef’s table but managed to arrive on time for this special event. Located in a separate dining room, each table was set with crisp linens and views of the open kitchen while the chef busily prepared several courses. 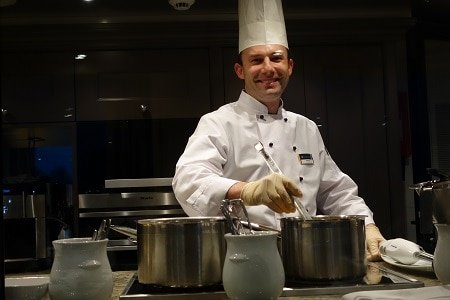 I was especially looking forward to the dinner, as AMA is a member of the La Châine des Rotisseurs culinary organization. The number of attendees was limited, and our tablemates grew to know each other by exchanging travel stories and enjoying a wine selected for each course.  Hot potato soup with vegetable bonbon was just the right amount before my tender rack of lamb prepared with five spice sauce was served. I even had room for dessert, a lovely lemon panna cotta accompanied by grapefruit sorbet.

The Executive Chef Tells Me More…

I had the opportunity to speak with corporate chef Robert Kellerhals. Chef Kellerhals ensures all the AMA ships in the European section follow the same culinary standards set by the company.  The foods are regional and change with the seasons to provide passengers the best ingredients for each meal.  Slipping into the variety of ports offers the chance to shop for fresh fish, produce and wines.  Chef was proud that everything is made from scratch and the rarely seen baker works through the wee hours pulling breads and Danish out of the ovens.

Eating and Drinking on the River

Guaranteeing the foods are regional means signature dishes are served specific to an area such as in France and Germany.  Viewing castles on the Danube River while eating spätzle or petit fours along the Seine River truly enhances the cruise experience.  Now I’m ready for future cruises!

7 Days Went By Too Fast

Amsterdam was back in sight, and disembarkation would soon begin. But not before I had one last piece of coffee cake and bid the staff farewell.

AMAWaterways is a family owned and operated company with attention to personalized details and providing first class passenger services whether on the Danube, Rhine or Mekong rivers.  It’s a journey which creates a lifetime of memories and I still dream about chocolate and tulips.

Disclaimer-I was a guest of AMAWaterways but my opinions are my own.  This article is revised from the original publication in Tripatini.com June 29, 2015.