One hour east of Palm Springs is the General George S. Patton Memorial Museum. Right off I-10 at Chiriaco Summit, the building is full of Gen. Patton’s history, war plans and a video about the General. The museum sits on the property known as Camp Young, which had been chosen by Gen Patton for soldiers to train in desert conditions, preparing for North Africa. On the grounds are military tanks and remembrance walls for WWl, WWll, Korea and Vietnam wars.

Many of the inside displays from these wars have been donated by loved ones honoring their service and sacrifice. While it’s not a fancy Gov’t funded museum, it conveys somber appreciation in many ways. 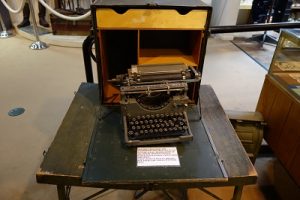 Desk and typewriter used in training field
Tags: Gen Patton, Indio, Patton Museum
Previous postReminiscing on Old Hwy 80 Next postSo many dates, one by one