Is This The Real Boston Creme Pie

Which one is the real Boston Crème Pie?  I always assumed Boston crème pie was a yellow layer cake with custard in the middle and a thick chocolate glaze covering the entire cake.  When I was a kid it was a treat to buy one at our local supermarket because this cake was no ordinary cake and appeared so decadent. 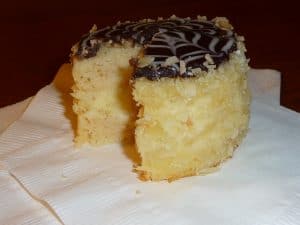 Years later while attending a food seminar, the guest speaker who had studied food history, told the crowd not only did parker house rolls originate at the Parker Hotel in Boston but also the Boston Crème Pie.   That made sense to me and I needed no further explanation.

Sometime back, I walked past the Omni Parker Hotel in Boston and pictures of the famous pie were posted over many of the outside walls.  It did not look like the cake I grew up with and went inside to investigate.   The cakes were small round individual sized with crushed almonds on the outside and a scoring of white and dark chocolate on the top.  How can this even compare to my tried and true cake?

I sat at a bistro table with fork in hand ready to dissect it and make a taste comparison.  This cake was more like a sponge cake than a layer cake and the middle section was a lighter pastry crème than custard.  The finale were the crushed almonds on the sides.   Different but good.