Locked hearts along the Rhine 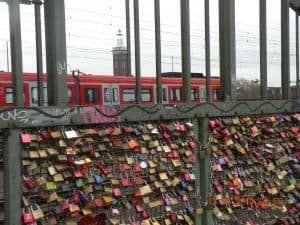 The train ride from Frankfurt to Cologne was along the scenic Rhine river where the cruise ships bring many eager tourists to see the towns and here I was taking it in from the train.  Now I see why the Rhine river cruises are so popular. The river flows with a strong current and looks very cold mid December.  Little villages dot the landscape with church spirals, town halls and houses close to each other as if to stay warm.  Just like one would see in a glossy travel brochure. Beautiful.

We dropped off our stuff at the hotel and walked across the bridge to the the old part of Cologne near the cathedral.  The bridge is named after a noble family in Berlin, the last Imperial leader Wilhelm the second.  The bridge is filled with master style pad locks on the gates and this tradition started  10 years ago when people married and locked up their lasting relationships.  Each lock is engraved with the couples name and then the key is thrown into the Rhine river noting its easier to get a divorce then get the key from the river. 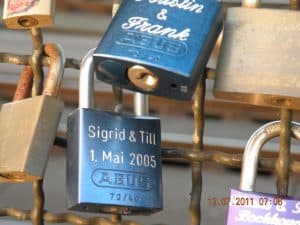 Into the many Christmas markets near the Cathedral and I learned the people love Swiss cheese.  We ate melted Swiss on bread and in pasta with the cheeses on the pasta a bit more tangy than on the bread.  Found the cookies and gingerbread and of course grilled wursts.  It was evening time and people young and old gathered around the small and tall tables to talk and drink the hot wine.  A group of men sang songs as they held up their cups of wine and exchanged pleasantries.

A tour inside the cathedral was fascinating and we lit candles to St Joseph after donating a few Euros in his namesake.  We will try the markets in the day with less crowds and when I’m ready to get yet another bratwurst.

Tags: Cologne, Germany
Previous postScissors and soup in Frankfurt Next postFerries and Bart in San Francisco