Mike Nelson, the hero from the old Sea Hunt TV series (1958-61), starring Lloyd Bridges, has a restaurant fittingly named in his honor. In the show, Nelson was a former US Navy frogman called to assist with dangerous underwater situations needing his skilled assistance. He fought off aggressors doing dastardly deeds to save others or sunken treasures. Teenage girls loved him and future Navy Seals wanted to be him.

The weekly adventure show captivated audiences with the vast Pacific Ocean coast line which was one of Sea Hunt’s filming locations.  Just north of Los Angeles, at the former Marineland of the Pacific and now Terranea Resort, Nelson’s is situated near the bluff overlooking the craggy coast. The restaurant’s walls have colorful posters from many of the episodes, all action packed with the legendary Mike Nelson as the champion. There’s even a wooden boat hanging from the rafters that he probably used to get from the shore to the depths of the ocean. 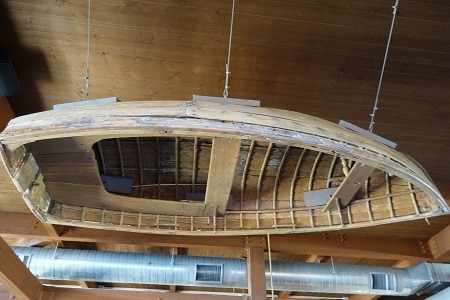 I devoured a savory chicken sandwich served on fresh focaccia bread and enticing drinks were “Man Overboard” (episode 117) and “Roustabout,” in which he rescued a Hollywood starlet – and appropriately the drink is made with champagne, single barrel and St. Germain liqueur.

As the sun set over the glistening ocean, I visualized Nelson submerged and keeping America safe from the depths of the sea. 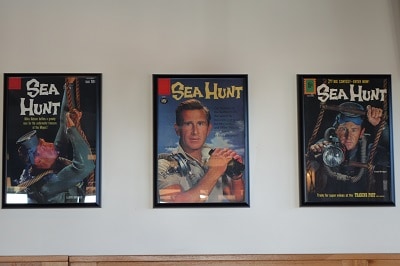