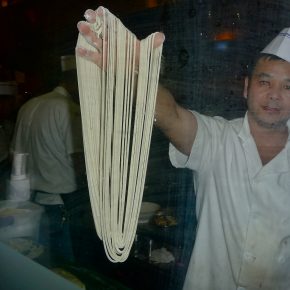 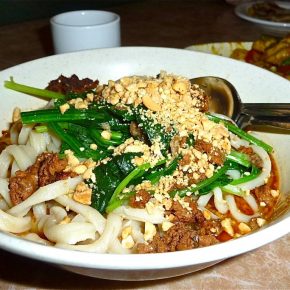 I’ll admit to watching food shows and making lists of places to try while on the road.  I would experience great eats throughout the year if I could.

While in Vancouver, Canada, I had the opportunity to eat at one such place that I saw on Guy’s show.  Peaceful Restaurant on West Broadway is known for handmade noodles.  The restaurant is small but the crowds are big and there can be long waits, thankfully, we arrived just before the masses.

I peaked into the open and narrow kitchen and watched the master, Liang Jitai, cut dough that was shaped like a loaf of bread skillfully cut it into smaller pieces with a big clever. Next he used his hands to knead, fold and then begin his magic.  He artfully pulled the dough turning it into thick strands while he whirled and twilled until very long ropes of noodles were made.  He quickly put them in a boiling pot of hot water until they were cooked to just the right texture for each order.  Flat blade noodles were thick and chewy and thin noodles were soft.

The delightful and traditional noodles are in the hands of the master noodle maker.

Highly rated beef rolls are a favorite here and we also shared Dan-Dan noodles (spicy peanut sauce), sizzled hot chili noodles, northern curry with chicken and Sichuan stir fried noodles.  We all enjoyed each dish and shared around until we couldn’t eat anymore.