Asia / Posts from the Road

Rickshaw rides and massages in Hoi An, Vietnam

Not my usual post about food (next time), but we really got “local” in Hoi An, Vietnam!

Chris had an exciting rickshaw ride and I had a massage and later threading of the eyebrows. His rickshaw ride was $5 and I saw him parade around the corner as if he was the King.

I was enjoying an iced Vietnamese coffee in a little café and asked where I could get a massage. Right away, the man called someone and walked me across the bridge to a woman who was ready to assist at her massage business.  I laid on the table and the small woman straddled my back and in-between relaxing strokes, she pounded me with her fists. Only $20 and knots in the back gone.  The massage room was set up different than I’m used to with many massage tables in one room. I was relieved that no one else was in the room getting a massage or watching mine. The place was clean and family members were present, even the kids were eating lunch. 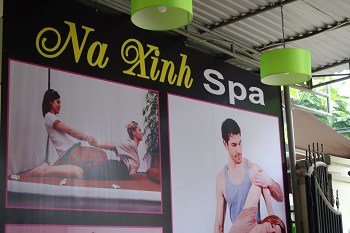 After my massage, and back at the café, a woman approached and asked if she could thread my eyebrows. She wouldn’t take no for an answer, so I finally gave in, besides I needed a brow clean up.  After threading the brows, she used her sharp thread which was wrapped around her fingers and bounced the string over my face.  I can say it does the job but ouch, painful stinging as she worked her string.

Our day in Hoi An was eventful to say the least.

Pechanga More Than a Casino-Come Experience it All! Feb 7, 2020