Ushuaia, Argentina: Near the Bottom of the World 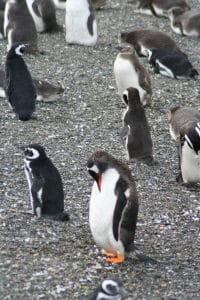 The Southernmost part of the world

Swimming and paddling in the cool waters, the white tuxedoed chests of the Gentoo and Magellan penguins are comfortable near the southernmost part of the world, Ushuaia, Argentina.

Ushuaia, the capital of Argentina’s Tierra del Fuego province, is nestled on a bay between the Andes Mountains and the Beagle Channel. Known  as the end of the world to some, it’s a jumping-off point for Antarctica. The waters led us to sand bars in the Patagonia-Argentina region full of sea life and sea birds.  Colonies of penguins and sea lions graciously let us take pictures with our catamaran tourist group.

Visiting between September and early February is the time to see the scores of penguins gathered together on the shore and making nests for the impending new births. I saw some young ones with their baby feathers molting and pairs engaged in lively talk and fun antics.

While in Ushuaia, I used my Skype system and called friends to say, “I’m calling you from the southernmost part of the world; I’m at the end of the world.” The reception on Skype was clear and my friends were amazed!

Revised from the original article.