This New England cruise is Chris’ trip because he loves cruising. Getting to Montreal, Canada a few days early, I decided to investigate one of the best bakeries in the world, Maison Christian Faure in Old Town, Montreal.
Chef Faure was named the best pastry chef of the world and has many awards after serving kings, princes and presidents. The macaroon tree is an artful creation using spun sugar for the bow at the bottom of the cake.
While I was drooling over the gorgeous pastries, who walked in to buy a few morning pastries but Chuck Hughes from the Cooking Channel show, Chuck’s Day Off. He beat Bobby Flay on Iron Chef and his show Chuck Eats The Street visited eateries in North Park last year. We had an interesting conversation about the immerging Baja food scene which is one of his favorite places in January.
Starting the trip out sweetly, Maison Christian Faure and Chuck Hughes! 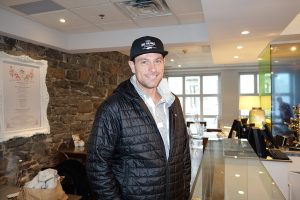