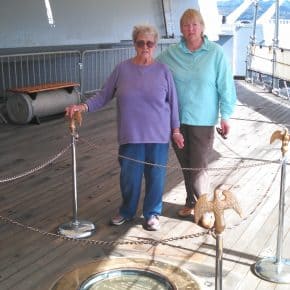 It’s my mom’s 85th birthday soon and since she had always wanted to see the surrender deck on the USS Missouri, we went to visit the famous battleship at Pearl Harbor, Honolulu, Hawaii.

We visited Pearl Harbor and the USS Arizona Memorial over 10 years ago and now there is an expansive Pearl Harbor visitors center which we reached by shuttle bus from the hotel.  Helpful information personnel give directions and costs to visit the all encompassing sites such as the Arizona Memorial, the Missouri battleship, USS Bowfin submarine, Pacific Aviation Museum and other attractions well worth seeing.

We had a guided tour on the “Mighty Mo” battleship and the amount of facts and figures the guide gave our small group was amazing.  He explained how the ship was built, performed during combat and non combat, and interesting details about personnel during the war.

The surrender deck has an historic plaque posted with the names of ranking officers and their countries represented from the Allied Powers that signed the official surrender documents and where each official stood during the ceremony.  The surrender signed documents are encased and clear to read which were signed in Toyko Bay September 2, 1945.   67 years after this world event and the atmosphere is still somber and filled with life changing heroes.