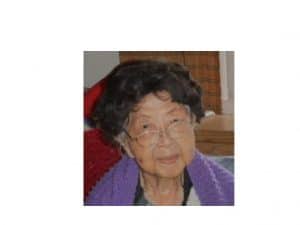 Her soft hand held mine as she warmly greeted me in her home, above her landmark restaurant.

Mary Teshima is 105 years old and up until recently, greeted customers in her namesake Teshima’s restaurant where her great grandchildren now run the business. Near Kona, Hawaii, she has provided gracious service for tourists and locals for 85 years.

Mrs. Teshima grew up in rural Hawaii before it was a state and has fond memories of her birth place on the Big Island. Back then provisions would come in by boat and what they grew in the fields and on the dairy farm sustained them. It was good times she said, riding a donkey to school and eating coconuts with her fingers.

One good fortune came when she met her husband, Fumio Harry Teshima who was attending college in Hilo. Her father liked him right away and Harry respected him, and because Harry was educated, her father told her he would make a good provider for her. Soon working the farm became too difficult while caring for their 5 small children, so she opened a little store and it grew to its present day restaurant. She prepared Japanese style meals using kerosene gas and lantana wood from the beach to fuel her stove in the early days. Buying a small piece of meat and stretching it to serve more people helped her restaurant remain successful. She also had many she bartered with on the island to feed the soldiers and others during the war.

After finishing my meal of light and crisp shrimp tempura, I noticed a man sitting in a booth and ordering lunch. His name was Takao and has been a loyal customer for 60 years. He reminisced about coming to the restaurant since he was in high school and buying a meal for 30 cents.

Mrs. Teshima worked long and hard hours for many years and was always there in times of need for the less fortunate. She summed it up by saying; it was all done in the true Hawaiian spirit.