I’ll admit I like staying in 5-star resorts in Hawaii but when it comes to eating food, I want the local and family owned places.
While visiting the west coast of the Big Island and around Kailua-Kona, don’t miss these authentic Hawaiian eateries and soak in the local flavor.

Drive 20 miles south from Kona and the old Hawaiian town of Captain Cook makes you realize this is what Hawaii used to look like years gone past. This area is so named because its where British explorer Capt Cook landed his expedition ships several times and ultimately was killed by Hawaiian warriors Feb 14, 1779. The rich volcanic soil area is known for coffee bean plantations, avocado trees and growing cocoa beans. If you also like being mesmerized by scalloped cliffs, sandy beaches and blue ocean waters, take a breath and realize true Hawaii has called you.

On the two-lane road Mamalahoa Hwy (Hwy 11), stands the Manago Hotel and restaurant. The beige wooden building with brown trimmed windows sits close to the road with the ocean waves in the distance. Look for the red elongated T shaped Manago sign and you know you’ve arrived. Kinzo and Osame Manago began the restaurant 100 years ago and then added the hotel with simple, affordable and clean rooms. Word of mouth has kept customers returning since 1917.

Mrs. Manago was a “picture bride” and arrived by boat to Honolulu and immediately married Kinzo and made their way to Kona. They were lent $100 to start the restaurant and offered pork chops which became and continues to be the popular meal. Rice bowls are ready at each table setting and besides steamed white rice, veggies like squash, potato salad and green beans are additional side dishes included in the price.
Soon after placing our order, a server wheeled out a cart with plates full of chops bathed in pan juices. 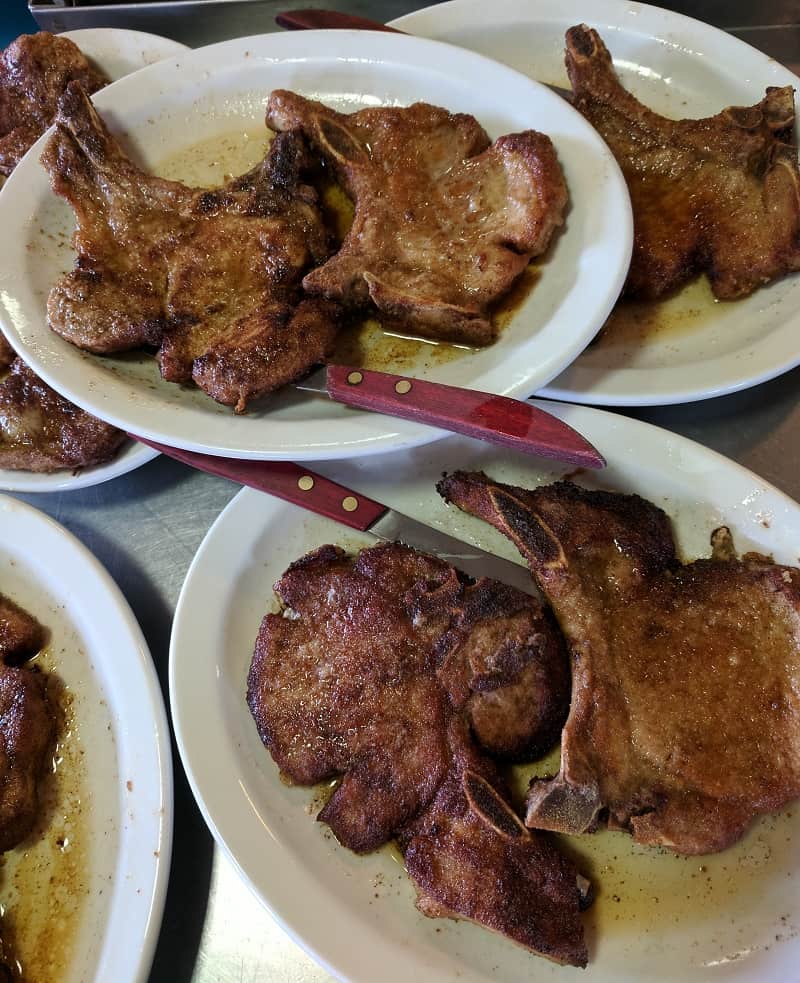 Dwight Manago is the third generation operating the business, and told me the chops are cooked in cast iron pans and never rushed. His grandparents began the tradition of cooking the chops this way and it’s what brings hungry diners, especially the 17-oz. chop for $19. So popular are the savoy chops, 3,000 pounds a month are served to locals and tourists. Breakfast, lunch and dinner are served 6 days a week and posted on the wall is a limited menu, easy to memorize. Dwight was pleased to say his restaurant had been recognized as being the oldest on-going restaurant in the state of Hawaii. 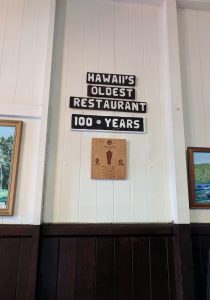 Make sure to look around the hotel’s lobby and parlor room for family heirlooms and pictures. Grandfather Kinzo was a camera buff and his cameras are on display and, a lunchbox used in the old days of picking coffee beans in the fields behind the restaurant.

Although we were very full, our friend who grew up in the area, directed us to nearby Sandy’s Drive-In. He promised us we wouldn’t be able to resist the hot sweet potato tempura, a long-time specialty. How right he was.
The sign for Sandy’s is visible from down the street and the design made me feel like I was back in the 1960’s. 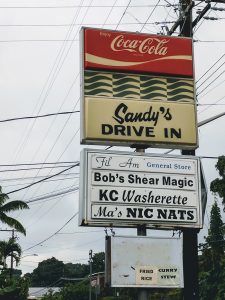 And no wonder, the restaurant opened in 1966. Sandy Iwashita opened her namesake casual restaurant with no restaurant experience and watched it grow along with her young family. Sandy’s son and daughter in law worked there too, and today granddaughter Kelsi is using her professional culinary training to oversee the operation. Kelsi has taken a leap of faith and added bulgogi fries and luau fries. Kelsi told me it took a while for others to warm up to the new food choices and now they have become regular menu items. But, don’t be fooled, grandmother is still in the kitchen every day and very picky about which sweet potatoes are used. After all, the tempura batter has been made in house since the beginning and is the pride of Sandy’s.

While we waited for the tempura to be prepared, people streamed in and ordered favorites like spam musubi, loco moco and fruit smoothies. Maybe they were on their way to volcano park and needed full stomachs before the long night at the volcano.
When our order of the steamy sweet potato tempuras was ready, I couldn’t resist but to take a bite and say, how heavenly tasting it was. 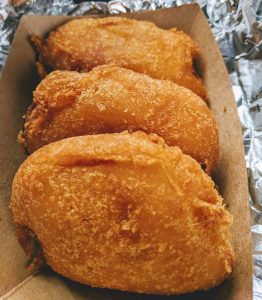 Now it was time for dessert.

Satisfying the sweet tooth is easy at Kailua Candy Company in Kona. White, dark or milk chocolate hand crafted around macadamia nuts is a breeze to load up on. If you’re familiar with turtle candy, they hand make it here with caramel and roasted mac nuts and it’s named Honus which means turtle in Hawaiian. Another best seller is Kona coffee swirls, so I shipped a box right from the store to my niece who is burning the midnight oil in college. 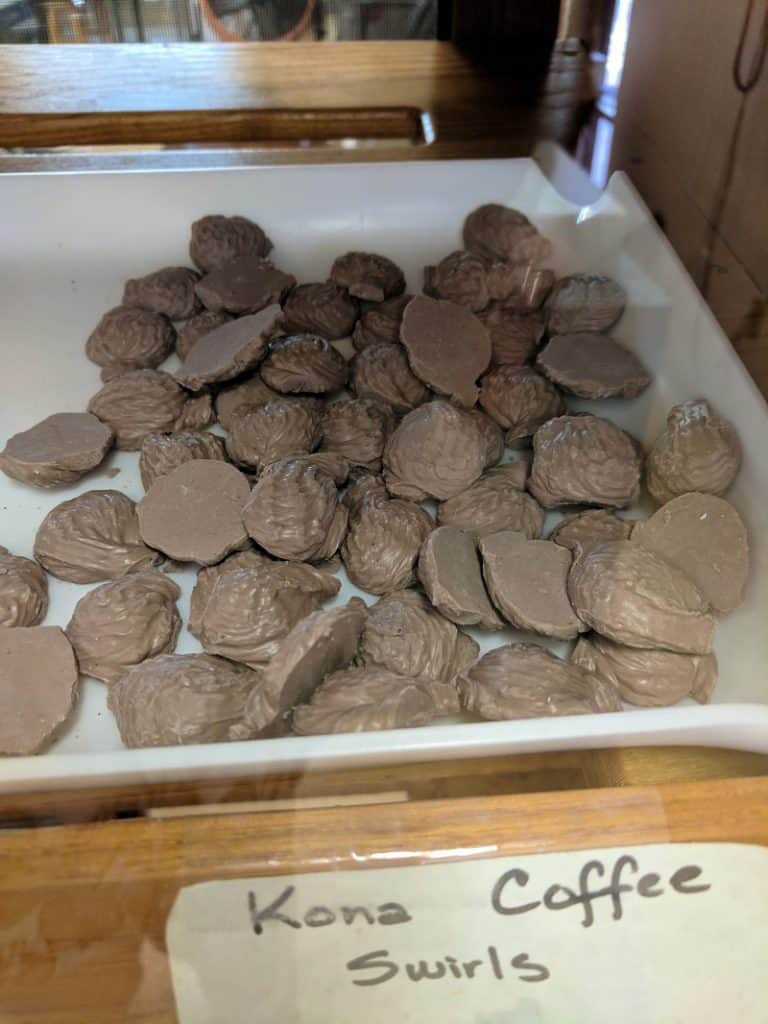 A family company and local business, Cathy and Robin Barrett learned the trade from Cathy’s parents. The day I popped in, Robin was making chocolates using one of the many kettles in the open kitchen. 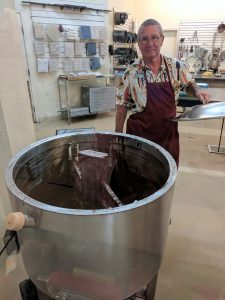 Just watching the process made me want more treats. Robin told me his wife Cathy came up with the idea to make cheesecakes using left over candies for the crust. Let me just say, the velvety cheesecake was divine.
I also picked up a bag of coconut-mac nut brittle for someone who can’t eat chocolate. The brittle is made by a hand stretched method and full of crunchy sweetness.
After a day of eating, it was time for a nap. Hawaiian paradise comes in all kinds of sights and food, it’s just a matter of exploring the Kona coast.