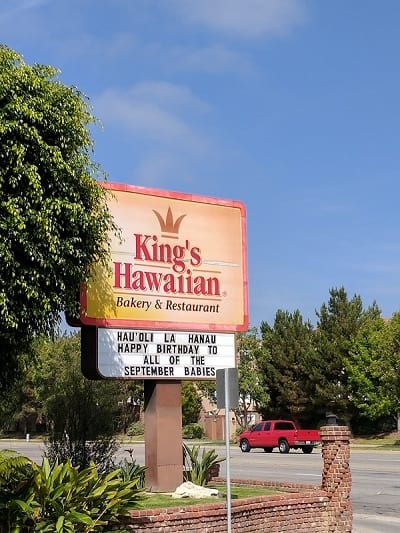 King’s Hawaiian bread is easily recognized with its orange lettering and sweet rolls sold by the dozen, and its humble beginnings started in a small bakery. The family has been a big part of the business’ success from day one and continues to this day.

Let’s go back to the 1950’s when Robert Taira opened his bakery in Hilo, Hawaii and offered varieties of bakery goods to a tight knit community.  It was appropriately named Robert’s Bakery and the original building still stands, even after enduring a tidal wave in 1960.   Of his many delicious items, his sweet Hawaiian bread grew in popularity and became a best seller.  There were no overnight celebrity chefs back then, he diligently worked on his recipe and attended baking classes until he found just the right ingredient combination.  As the bakery became more successful, he moved his family to Honolulu and opened a bigger bread production facility in Hawaii’s capitol city.

The new location was on King Street and the company officially changed the name to King’s Hawaiian.

Over time the company grew into nationwide distribution and branched out into many new product lines. To better handle the growth and production, facilities and headquarters were moved to the Los Angeles area of Torrance, California and another production site in Georgia.  Although the company has grown way beyond its modest beginnings, family members keep the business model true to its original beginnings of hard work, good customer service and consistent products. Hawaiian bread has been imitated by other companies but still today, his treasured bread recipe is under lock and key.

Yet, knowing man does not live by bread alone, King’s Hawaiian Bakery and Restaurant was opened on Sepulveda Blvd in Torrance and a second location between Torrance and Gardena, Ca.  To say they are wildly successful is an understatement. Not only are meals served all day, but a full bakery makes for long lines on weekends.

I had heard from a local resident; the bakery’s paradise cake was like none other and a favorite for special occasions. It’s a three-layered chiffon cake with Hawaiian flavors of guava, passion and lime plus filled with whipped cream. 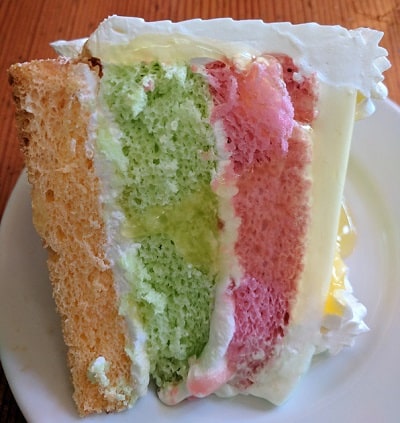 The Sepulveda Blvd restaurant was on my radar to experience what others were talking about, and my friend Nancy who grew up in Torrance tagged along.  As I drove near the restaurant, I thought I was in the wrong place because the outside design of the building had an odd shaped brick chimney and conical roof with a copper point. Spotting the King’s Hawaiian sign, I drove straight back to the large parking lot.  Once I entered the restaurant, it was like stepping onto the Hawaiian Islands with vibrant colored walls, tropical plants near a life-sized pineapple and an aquarium. 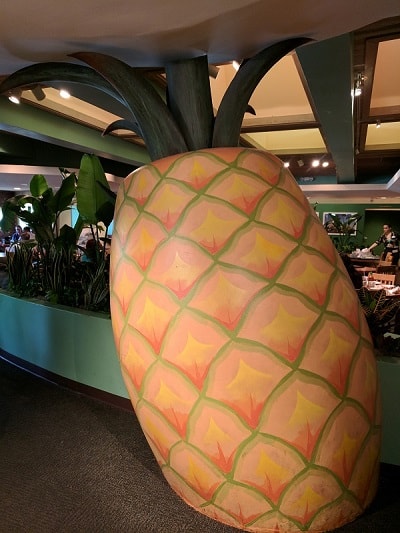 Hawaiian music set the tone for an aloha dining experience. The restaurant was full of talkative families and children happy to be eating with their Ohana (family in Hawaiian).  I was able to look over the bakery cases as we waited for a table and I knew I had many difficult and delightful decisions this morning.

Once seated, I read the traditional menu items of loco moco, kalua pork and spam musubi, yet I homed in on the Big Island Breakfast. When the plate arrived, it was loaded with King’s Hawaiian French Toast, eggs, and bacon. Spam and Portuguese sausage were other meat choices, but I like the usual bacon with my eggs.  The French toast was delicious and how could it not by using sweet bread grilled until browned and drizzled syrup on top. 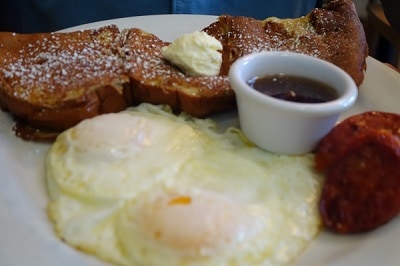 Nancy cut into the huli huli chicken with sides of macaroni salad and steamed rice and suddenly remembered this had been Ichabod’s Restaurant in the 1980’s.  That could explain the outside architectural brick work and roofline.  She also told me she was ordering the macadamia nut pie to go and probably a few other treats to take home. 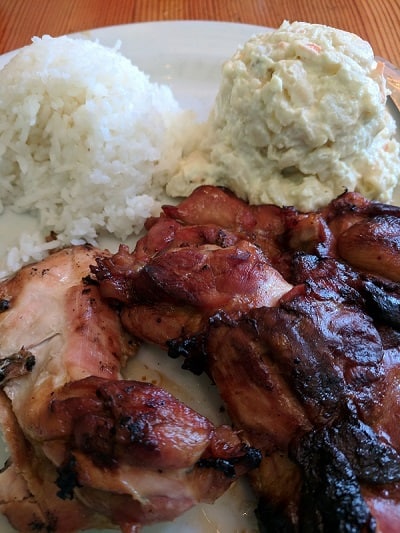 Stella Miyamura, Robert’s daughter, scurried inside the lively restaurant but took the time to speak with me.  Stella told me the family members work together and are hands on with the business.  Her uncle baked until he was 92 years old, and cousins are also long-time bakers. Typically, 300 paradise cakes are sold on Saturday’s and then there’s the chocolate banana cream pie and coconut cake making their way out the door. 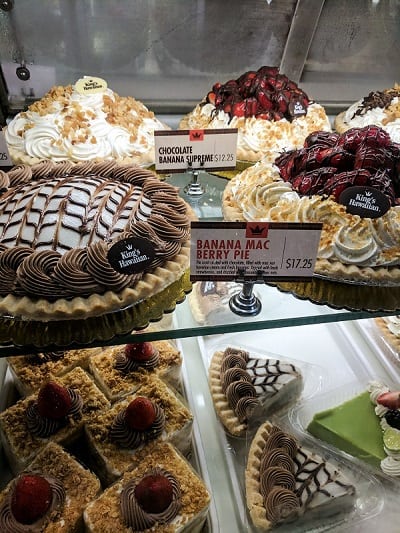 From its small beginnings to becoming a very successful company, King’s Hawaiian is a company people recognize which offers much more than the bread rolls we’ve come to love.

When you can’t fly to Hawaii, the aloha spirit overflows in Torrance and the proof is in the paradise cake.

Disclaimer-I was a guest of King’s Hawaiian Bakery and Restaurant, however my opinions are my own.