Almost cult like, there is a serious following with no pretense and images of little grass skirts. Welcome to tiki bars, and this one hasn’t lost momentum in seventy years. Located in the famous and internationally known Fairmont hotel high on Nob Hill, San Francisco, the Hurricane Bar and Tonga Room are wildly popular. A place not to be missed when visiting this cosmopolitan city. 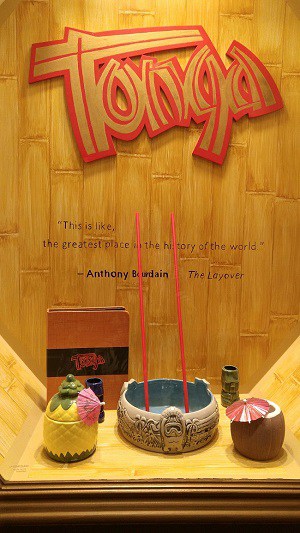 Nearly full the night we arrived for Happy Hour, we managed to get a seat while others stood around bar tables and gabbed, raising the noise level in a jovial way. A hostess in the reception area made sure the bar was not over its capacity levels and between her and the posted plainclothes security person, it all stayed under control.  Inside the wooden hut sitting area, my husband and I ordered signature drinks of Singapore Sling and Mai Tai.  Tonight a $10 buffet was available in the bar with chicken wings, egg rolls, fried rice and chow mein which tamed the strong drinks.

Enjoying several drinks next to us, were two young women who travel for work. One of the women, now lives in Chicago, but makes a beeline for the Hurricane Bar whenever she is in town. She has been coming here for 30 years and giggled while reminiscing about stopping here after scooter rallies in her younger days.  Tiki bars are making a comeback, she told me, but they are too modern looking without real ambiance and frightfully, make the old name sake drinks in a contemporary way. Some say there is no other authentic bar like this one, including the Hawaiian music in the dimly light room.  Local controversy erupted when word got out the bar and restaurant planned to close and be torn down in the name of progress. Social media campaigns were launched to save the Tonga Room and an outpouring of support evolved.  Celebrity Chef Anthony Bourdain filmed a short segment on his CNN show, The Layover, and while drinking several tropical drinks, declared, “This is like, the greatest place in the history of the world”.  After this aired, people came in droves to drink in the experience and the Tonga Room was saved from destruction. I’ll admit it also, the show influenced me to pay a visit. 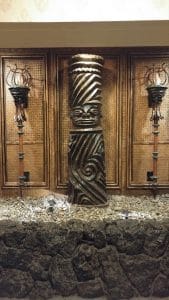 What is it that brings people to this tiki bar? Inside the darkened bar and adjoining restaurant old fashioned strings of lights drape along the low ceiling with lighting reflecting on the pool, yes a swimming pool.

To learn more about the Tonga Room and hurricane bar, the history needs to be explained. The Fairmont plunge built in 1929, attracted celebrities and professional swimmers to this novel indoor pool.  Movies such as Mutiny on the Bounty and Hurricane were popular and Ben Swig, owner of the Fairmont believed a Polynesian style restaurant would be very popular. The Fairmont was the place to be seen during this time period, and leading art director, Mel Melvin from MGM studio designed the original bar and restaurant around the pool in 1945.  Adding to this atmosphere was a floating barge in the pool and an intermittent rain shower with lightening.  Tropical paradise had arrived on this lagoon in San Francisco.

I decided dining here could be a once in a lifetime experience for my young adult niece and nephew and invited them to join us for dinner the next night.  After all, it’s the role of an auntie to spoil them in places they usually don’t go to with rattan furniture.  Our table was by the edge of the pool, behind the bamboo railing, and we were warmly greeted by Nolly, our waiter for the evening. Nolly has worked at the restaurant for 25 years and suggested we start with the Royal PuPu Platter.  Bbq Kona ribs, spring rolls and chicken wings were served with Tonga sauce which is a mixture of soy sauce, molasses, aioli and mayonnaise.  Nibbling away on the appetizers, each decided to order a different item from the dinner menu. 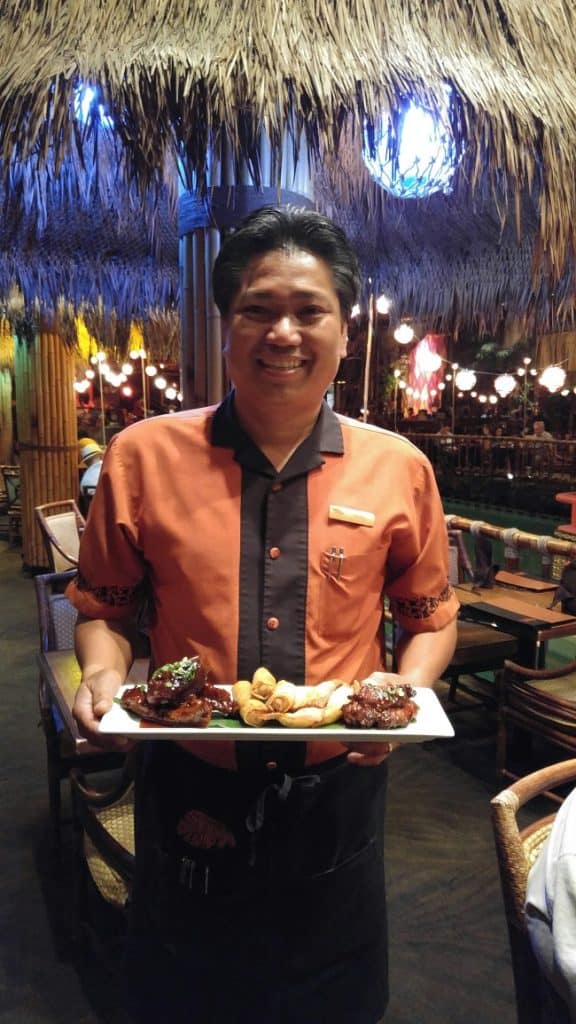 While consuming Kalua pork, saimin noodles, Mongolian beef, and mahi mahi, our attention was turned to the floating barge with a 4 piece band starting on time at 8 p.m.

Once the music began, the boat floated down and up the pool, at a slow speed entertaining diners.  The band, Island Groove, were dressed in aloha attire and played top 40’s music.

After 9 p.m. the age of the crowd had changed, and younger people with an appreciation of solid American nostalgia were dancing the night away on the original teak floor.  Much of the restaurant contains items from the S.S. Forester, an old lumber schooner that made many crossings from San Francisco to the South Seas. Take a look around to notice the sailing mast and flooring from this old ship.

The Fairmont Hotel is cloaked in nostalgia. Many movies have been filmed here and every president since Woodrow Wilson has stayed here while being in office. Make sure to walk through the hallways and take a look at all the historic pictures of the hotel itself and visitors such as the Queen of Tonga, old time celebrities and diplomats.

A note of caution, go easy on the rum drinks served in large punch bowls because jumping in the lagoon pool is not allowed. 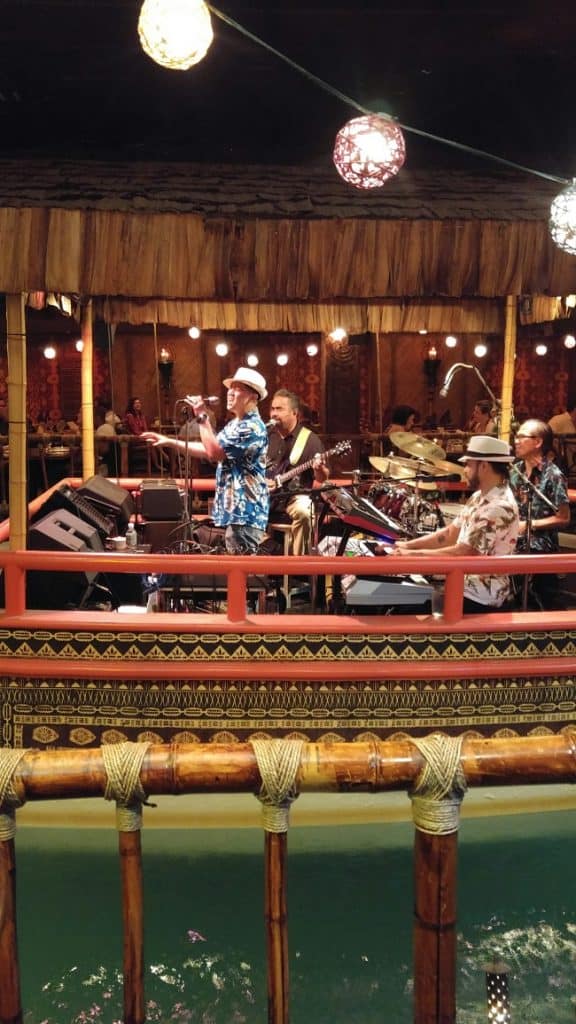 Plan your visit by visiting website http://www.fairmont.com/san-francisco  for days and hours of the restaurant and bar. Also check Facebook for updated scheduled events which may change the opening days and times.