Baking Saved His Life – and Then Brought Him Love

I could hardly get past the first bite in the slice of handmade apple strudel. The flaky dough was layered with sadness and yet hope. 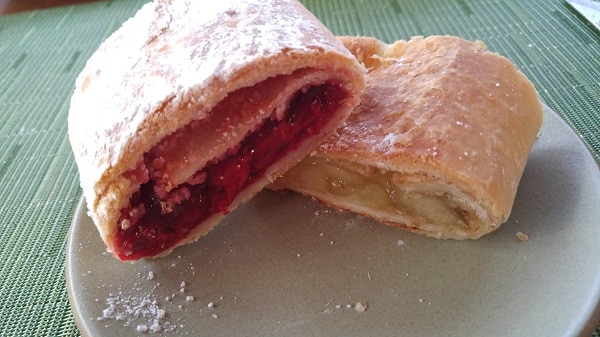 Ernie’s International Pastry Shop, located in Incline Village of North Lake Tahoe, Nevada, was hidden behind the outdoor restaurants in the mountain chateau center which spanned two parking lots. On this summer evening, I walked past the outside patios, crowded with people chatting, eating and drinking wine. I wondered if they come here in the summer to boat on the lake and maybe ski in the winter because they seemed comfortable in the surroundings. Being a bit off course, I the directory posted on a wall, which directed me to the bakery.

As I walked into the bakery, the buttery aroma hit my nose and then I saw a woman methodically using a rolling pin back and forth on cookie dough. I asked her if she was Ernie’s wife and she said yes. I thought it somewhat strange that she was the only one in there and baking on a Sunday evening. Bakeries usually do their busy work in the early mornings. Looking down and forlorn, she told me Ernie had recently passed away. She finished cutting out the cookies with a star cookie cutter and put the tray in the oven. In broken English, she told me her name was Marika and invited me to sit at the table. The table and table cloth were like my grandmother’s and she pulled out a stack of paperwork from a folder. 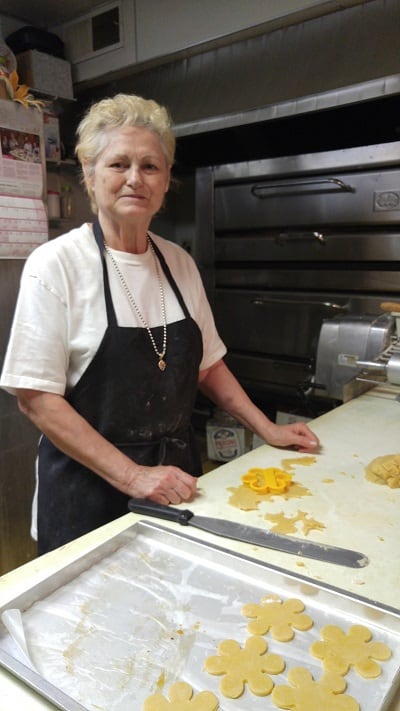 Ernie had been a survivor of the Holocaust and his life history was laid out before me. I was taken aback while looking through his completed form, Conference of Jewish Material Claims Against Germany, Inc, Hardship Fund. Page after page, the reality of his Holocaust survival became real. His Hardship Fund claim form for Jews Persecution by Germans, detailed the encampment placement. Here I was in what was supposed to be a typical bakery filled with sweet decadence and an air of lightness. My stomach tightened as I read the form and it was almost too much reality for me to read. 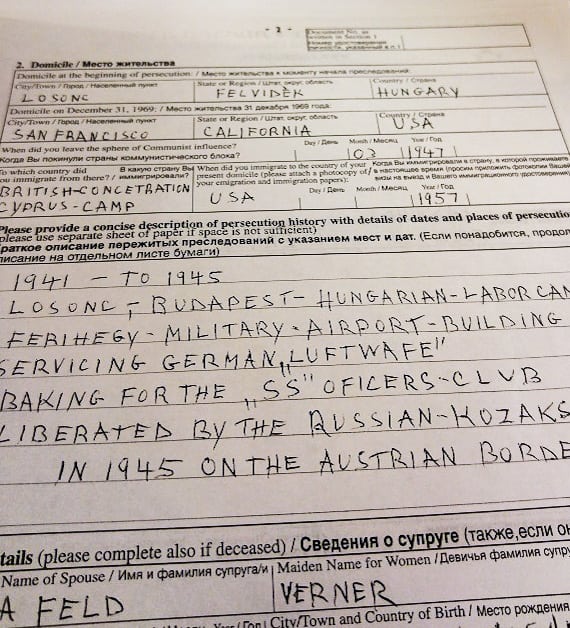 Ernest Zeev Ehrenfeld was born in Lucenec, Slovakia in 1925. At the age of 17, he entered a forced labor camp in Hungary and under the section, Where were you during the Period of Persecution? He wrote on the form, “Hungary -Ghetto, Labor Camp” 1942-1945. Numerous family members were sent to Auschwitz, including his mother who had taught him to bake. He never saw her again.

During the building of an airport near Budapest, the Nazi SS officers found out Ernie could bake and he was brought into the kitchens to cook for them. His poppy seed strudel was the favorite among the SS officers and it spared his life. In 1945, he was liberated and moved to Belgium and then to a Cyprus British Concentration camp. 1949, Israel became independent and he lived there until 1957 when he immigrated to the USA. Being in another new country did not stop him from earning his GED in San Francisco in 1960, a mere three years after his arrival to San Francisco.

The aroma of baked cookies filled the air and I mentioned to Marika it smelled like the cookies were done. She went to the oven and pulled out the tray of cookies which were browned around the edges and walked back to where I was sitting. She encouraged me to keep going through the papers. A document in the folder was his Naturalization certificate declaring him a US citizen April 19, 1963. He shortened his last name from Ehrenfeld to Feld and he signed his citizenship papers Zeev Ernest Feld. His penmanship was in legible English cursive writing.

Ernie continued to work in bakeries including David’s Deli near San Francisco’s Union Square and other bakeries in Oakland. When most people are thinking about retiring, he moved to Incline Village in North Lake Tahoe and opened Ernie’s International Pastry Shop.

Love came to him on a return trip to Budapest. He met Marika through friends and after a long-distance romance, she married Ernie in Lake Tahoe in 1993. Marika had been a secretary and he taught her his baking techniques. Clientele found his pastries and Marika’s meals of goulash soup and other Hungarian specialties delightful and satisfying.

Before I left the bakery, I looked at the display case and saw a shelf of butter cookies and a tray with apple, cherry and poppy seed strudel. Marika handed me slices of strudel to take with me and I carried the bakery bag as if it was full of gold. This strudel had more significance than the best I had ever eaten anywhere.

Ernie’s life was transformed through pastry tables, baking and display cases for over 70 years. He was known to use humor to overcome the mental and physical brutally he incurred. Marika showed me letters school children wrote him when they heard about his life. The touching notes hoped his life was now full of happiness.

Marika continued with Hungarian traditional cooking by working in the bakery every day and making strudel.
Ernie’s International Pastry Shop is interlaced with history and hope for the future.

This article is revised from the original article.