Beverly Hills’ Lawry’s Prime Rib: The Taste Is in the Silver Cart

My dining extravaganza began with a spinning salad as dressing was poured from high above and the bowl spun in a mesmeric rotation. I tried to finish my salad until being distracted by the silver cart brought tableside and loaded with slow roasted prime rib roasts.

Lawry’s The Prime Rib in Beverly Hills, California, opened in 1938 and has a loyal clientele in its many locations. Known for the “old school” service, female servers wear pressed uniforms, big bows and head pieces to compliment the men in vests and white shirts. Some employees have been a part of Lawry’s for more than 30 years, and although numerous celebrities and dignitaries have graced the leather booths, each customer is treated with the same professionalism.

Original owner Lawrence Frank designed the innovative stainless rolling carts, which are five feet long and weigh 600 pounds, adding a defining look to the classic eatery. The magical moment arrived when the huge cover was lifted open and a master carver took his place alongside the cart.  Inside was revealed  hot and steaming prime rib roasts ready to be precisely carved to the diner’s choosing.  A master carver earns the distinguished medallion worn around the neck by completing intensive training and is able to portion the meat by sight to within one quarter inch. Right on cue, servers dish up creamed spinach, creamed corn and Yorkshire pudding. 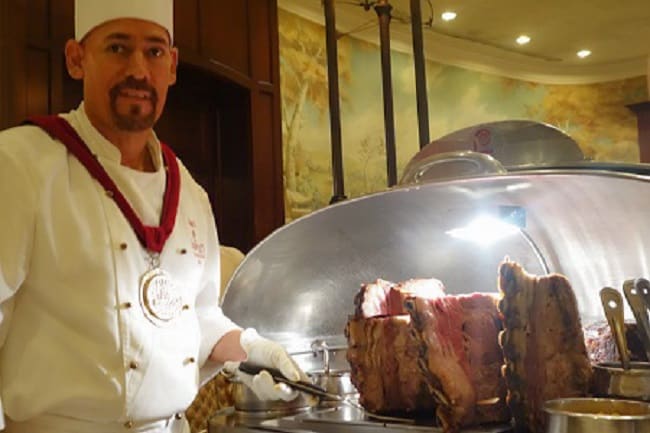