Poke, Hawaiians will tell you, is pronounced Po-kay, ending with an “e” and not pronounced as if its spelled poki.  With that in mind, I was ready for the annual poke competition in Waikoloa, Big Island, and an event of the Hawai’i Island Festival.  First I had to make my way past a royal guardsman of the Queen’s court holding an impressive spear twice his height. Once I was allowed entrance, rows of large bowls of poke were on display among colorful floral arrangements and draped Hawaiian print cloths. The competitors hurried to put finishing touches on their hopeful prize winners before the judges called time. 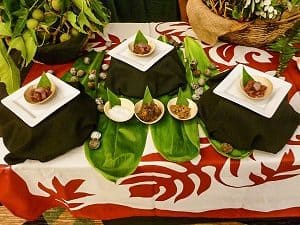 Nearly 40 amateurs and professionals chopped raw fish, tossed it in their special mixture and entered the categories of Traditional, Limu (seaweed) or Fusion.  This was the 9th year for the Poke competition during the Hawaiian Cultural Weekend and it drew a hungry crowd. Although poke shops have become much more popular on the Mainland, contest coordinator Linda Pokipala told me, it’s always been a staple in Hawaiian households.  The word poke means to slice or cut and only in recent years has taken on a different meaning due to mass marketing. I spoke with a native Hawaiian who said he grew up on raw fish and did not have cooked fish until later years. Poke is still his choice of prepared fish.

The alarm rang and it was time to walk tasting samples to the sequestered judges.  I was able to peek in on the judging and in between savoring lots of poke, they slurped poi to cleanse the palate. A swig of beer helped, too.

Poke has evolved globally and a new sense of creativity is known as fusion style.  Herbs, spices and imaginative ingredients boost the flavors but old standbys of Limu (seaweed) and traditional style haven’t lost popularity.  While traditionalists hold onto their basic tastes, modernists are stirring it up with coconut milk, sririacha and kimchi cheesecake.

The procession of the Royal Court entered the room and attendees and participants stood in silence during the presentation.  It was truly magnificent to watch this centuries old pageantry reminiscent of ruling Hawaiian monarchs.  Queen Mo’I Wahine gave her blessings and then the winners were announced.

A few of the winners were: 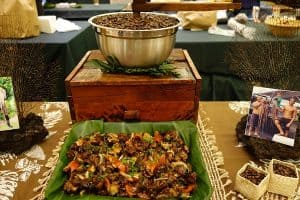 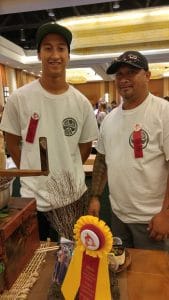 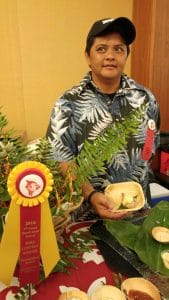 Even those who didn’t take home a ribbon, showed love and respect for island poke.  Each bowl was a tribute to old time Hawaiian families who caught fish and painstakingly gathered seaweed to make their nourishing food.  Poke brings the Ohana (family) together with pride and tradition.