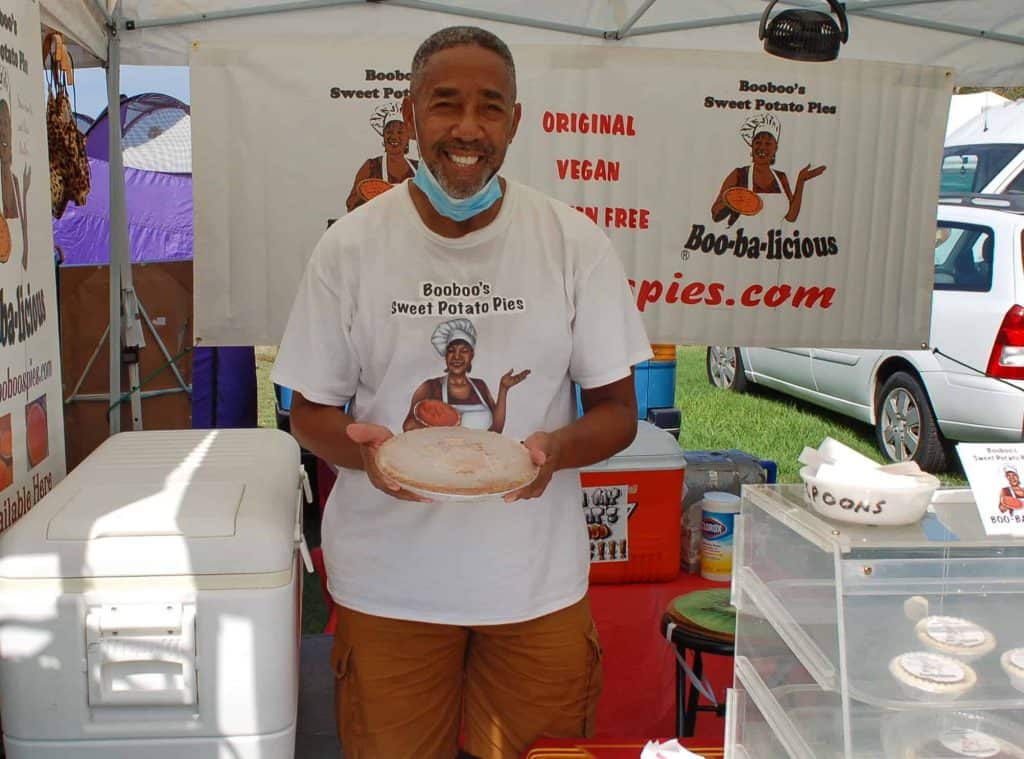 The Southern staple of sweet potato pie brings more to the table than pumpkin pie.  And not just at Thanksgiving in San Diego.

The sign, Booboo’s Sweet Potato Pies, caught my eye at the farmer’s market.  Humm, sweet potato pies in Southern California? My interest was piqued, and I decided to find out more.  I spotted Thomas Crain, the smiling man inside the booth and stopped to talk with him about the pies.

He told me people are curious about this kind of pie because they don’t know about it and wonder if it’s like pumpkin pie. People who do recognize it are usually from the South and eagerly buy some.  They say it reminds them of home. Those unfamiliar with the pie are surprised about how good it tastes.

Starting a Business After Retirement

Thomas missed the sweet potato pie from his Texas roots and his wife Cynthia kept making different variations until she made it to his liking. Both are retired and decided to start Booboo’s since friends and family loved the pie. Thomas tells me it was time to share the goodness of the pie in Southern California and make people happy.  They named the business Booboo’s after the loving name Cynthia’s grandchildren call her.  Getting started required certain food and business licenses, which required a lot of research and leg work.  The task of how to bake hundreds of pies, get supplies and where to sell had a few “bumps in the road” according to Thomas, but it did not deter them. 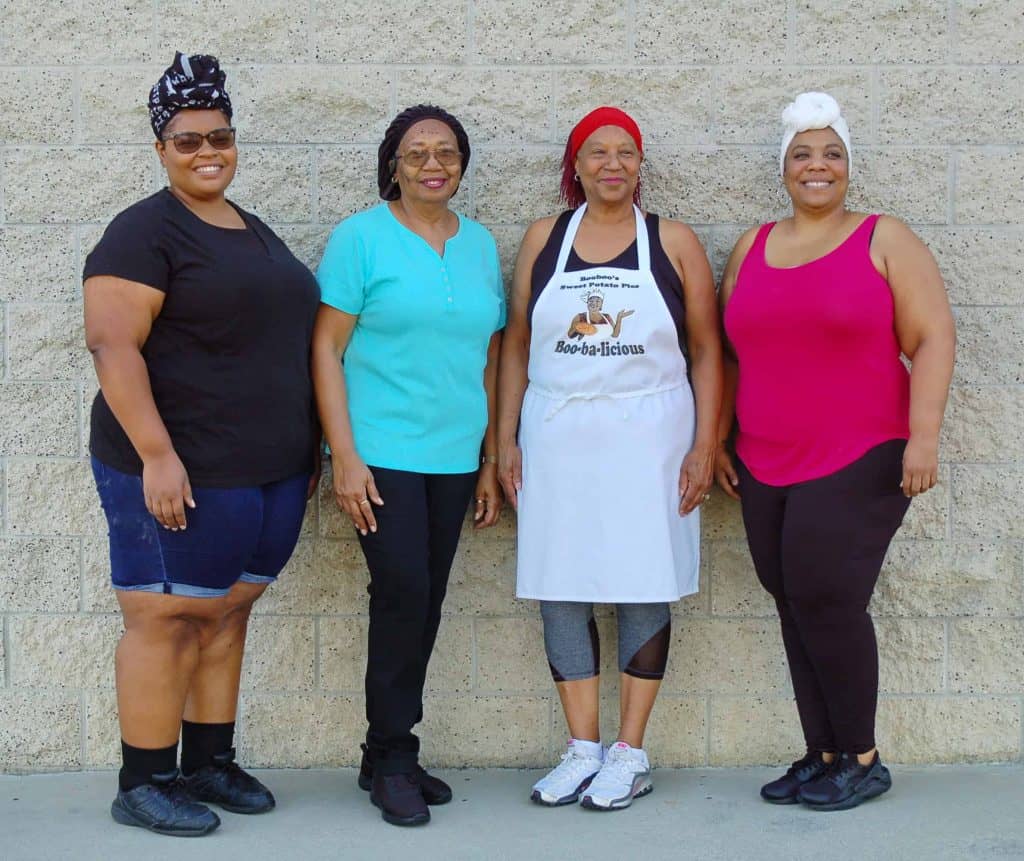 This process began six years ago and through trial and error, they settled on three farmer’s markets where the sales are profitable.

Cynthia has a set schedule of baking the pies in a shared commercial kitchen, and Thomas handles the sales. When I asked if the business was part of their retirement plan, they said their passion for the pies evolved into this business.  Some of Cynthia’s fun retirement plans such as dance classes, have been put on hold due to the growth of the business.  They both agreed that it is at a comfortable level and expanding the business is not needed.

The pie company is certified as a Minority Business Enterprise, which makes it available for government and commercial contracts.  If a nationwide company seeks to buy the company, the certification will assist the endeavor.

Some Changes Since COVID

The coronavirus pandemic has had some positive and negative effects on the business.  Samples are not allowed during this time which has considerably cut back on waste and cleanup.  Farmer’s markets are not as crowded as they once were, allowing shoppers to see their booth to inquire about the pies easily.

However, shutdowns have made securing some supplies harder to get and the Crains juggle between purveyors for specific products. No matter the difficulties at hand, over a thousand mini pies and hundreds of full-size pies come out of the ovens like clockwork.

Thomas and Cynthia both agreed on one thing: patience is of utmost importance.  Through the challenges each has faced with the business, they continue to work out issues by being patient and respectful. 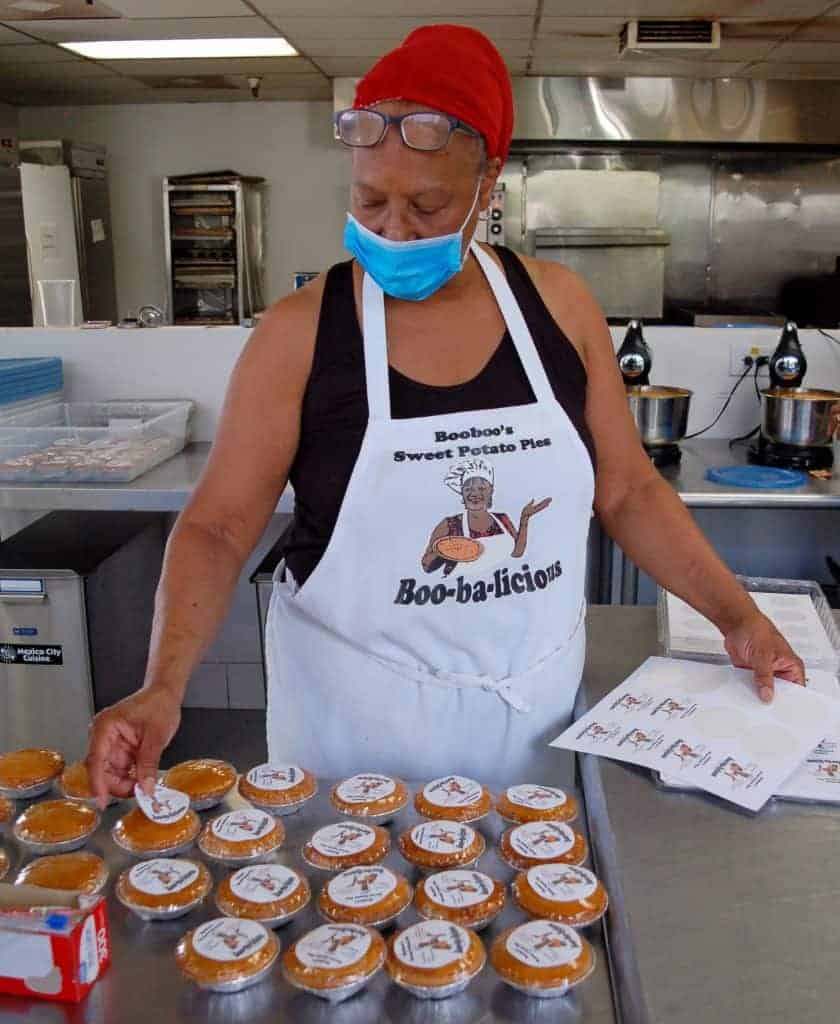 They also listened to feedback and started making vegan and gluten-free pies, which became best sellers. All the pies are sold frozen at the farmer’s markets and there is no shipping due to costs being prohibitive.  After much testing, they determined that a frozen pie will last for three months in the freezer and the refrigerator for five days.

Sweet potatoes give color and structure to the pies, Cynthia says. Depending on the time of year, the sweet potatoes can have tough skin or come from different regions and she has learned how to adapt. Standing in the kitchen, I saw her helpers using several average-sized stand mixers. I asked her why not use an industrial mixer. She said the smaller mixers produce a smoother filling with no lumps in the batter.

Being a baker myself, I also asked Cynthia about some of her ingredients. She looked at me while finishing the pies and said it’s a secret. And that’s why Booboo’s pies are “Boo-ba-licious” good.