I Immediately Felt in the Old World  When We Landed

Arriving on the tarmac at the Budapest airport, I walk down the steps of the airplane to an awaiting bus. It’s a wintry grey day and people are wearing heavy long coats and big fur hats. They’re speaking with strong Hungarian accents and I don’t understand a word of it.

For a minute I thought I was in the middle of a James Bond movie somewhere in Russia and far from California. Once inside the small baggage claim area, we gathered our luggage and our taxi driver was waiting for us. A friendly man who spoke in his best broken English explained the history and difference between Buda and Pest. Simply put, the Danube River divides Budapest, with Buda on one side and Pest on the other side. Together they united to become Budapest.

Driving from the airport, there were grey decayed buildings lining the road, reminding me that I was in  Eastern Europe. This is not the sunny Mediterranean or carefree Paris: this city has a serious feeling.

We checked into the Hilton Budapest, which sits in the Castle District, a UNESCO site with stunning views of the Danube and the Parliament building. The hotel not only lodged tourists but business people from Europe and Canada who were expanding their companies in Hungary. For dinner, we ate chicken and fish with lots of paprika and drank refreshing Hungarian wines.

St. Matthias Church next door had a Sunday morning Latin Mass at 11 a.m. and we decided to attend. 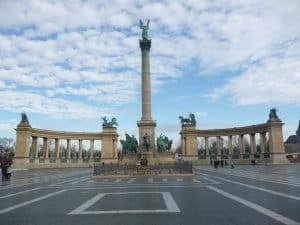 We entered the church and were stopped by two men who told us to come back at 1 p.m. for public time. We assured them we were there to attend Mass and were finally allowed entrance. The Mass was full of reverent worshipers. They devotedly followed the priest’s directions and sang with the angelic-sounding choir. It was evident to me they didn’t take their freedom to worship lightly.

Café Ruszwurm, a 200-year-old pastry shop was nearby, and we stopped inside the small café with dark wood cabinetry and bistro tables. Sipping a cappuccino and eating a layered crème pastry, I imagined the conversations that took place during Hungary’s many wars, revolutions and communist occupation. The memorial for the many who sacrificed their lives for Hungary’s independence is Hero’s Square, which allowed an opportunity to reflect on the cost of this freedom.

Since it was December, the Christmas Markets were buzzing with locals and tourists shopping and drinking hot mulled wine in a holiday atmosphere. Vendors sold an array of hand-carved wooden spoons, leather belts, colorful ornaments and even a big pan of hot goulash.

An old world feeling still exists in Budapest, which has experienced periods of destruction and rebuilt itself to move ahead in modern times. My next trip to Budapest will include soaking in their many hot thermal spas and eating more goulash.

Revised from the original article.