Get there early and forget your diet, my friend told me. Lunchtime at Las Cuatro Milpas on Logan Avenue is known for long lines and authentic Mexican food in San Diego. Waiting in line is worth it because once inside, aromas of home-cooked Mexican food take over the senses.

The menu is limited to the basics of border town Mexican food: tacos, tamales, rice, and beans with chorizo. You need to decide ahead of time what you’re in the mood for because people standing in line are itching for this genuine and filling Mexican food.

When it was my turn, an employee leaned over the counter to take the order as fellow coworkers behind her filled up the plate. It’s hard not to be captivated by the very large vat of boiled beans (frijoles) simmering away on the stove and tortillas handled like a mother cradling her child. Add a can of Coke and the total was less than $10 US. After paying at the register, cash only, find one of the metal tables covered with plastic tablecloths in the area where flour tortillas are being made by hand. It’s obvious, a lot of love goes into each tortilla. 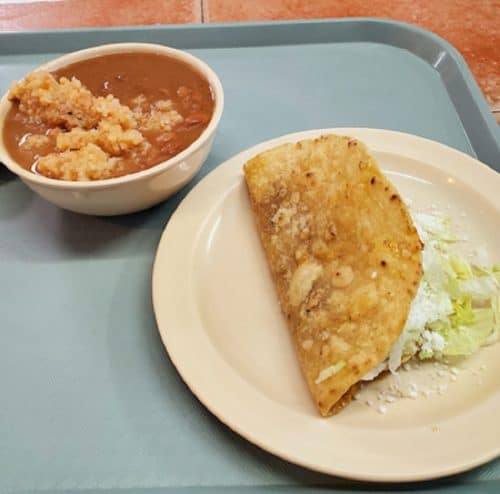 Since 1933, the experience of eating here is as close to Mexico one can get without crossing the border.

I talked with long-time community activist Connie Zuniga who is committed to the area’s historic preservation. She remembers the days when Logan Heights and Barrio Logan were adjoined before Freeway 5 separated neighborhoods. Back in the day there was no need to venture far, there were theatres, stores, and restaurants within walking distance, and the community cornerstones were the schools and churches. Connie told me as a child, the kids would wait for the train which went right in front of her house and they’d place pennies on the track for fun. Today, the MTS trolley has replaced the train and brings locals and tourists to visit for the day.

Barrio Logan has been undergoing a revitalization movement with shuttered businesses being transformed. People who didn’t have the area on their radar are becoming aware of the modern changes mixed with the older establishments.

Chicano Park has been the center of social activities for several decades and is a National Historic Landmark. The park has also been known as a gathering place where the people’s voices could be heard. Expressions of the community’s pride and history are visible on the colorful hand-painted murals beautifying the Coronado Bridge pillars. Over the years, artists have painted and restored the visual interpretations of the past and made the murals a must see. A comprehensive map of the murals for self-guided tours of the park’s artwork, plus ongoing events can be found at the Chicano Park website.

Make sure to walk across the street on the east side of the park and pay tribute to the Veteran’s Memorial Monument dedicated to the community’s veterans. Hometown residents lay flowers and prop up pictures on the granite statue for their loved ones who served in various wars. From there, look up and see the famous curve in the Coronado Bridge and hear the cars roar by. 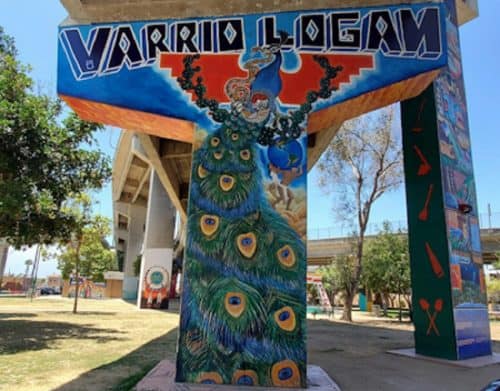 When the need arises to quench your thirst, head over to Border X Brewing at 2181 Logan Avenue. They brew Mexican style craft beers, like Horchata, a favorite Mexican drink usually made with rice, water and cinnamon. The brewery cleverly made a golden stout beer inspired by Horchata with cinnamon and vanilla and malted barley. It’s so good, the beer won a gold medal at the Los Angeles International Beer Competition. Step inside and gaze at the cherrywood bar and stunning stamped tin ceiling. 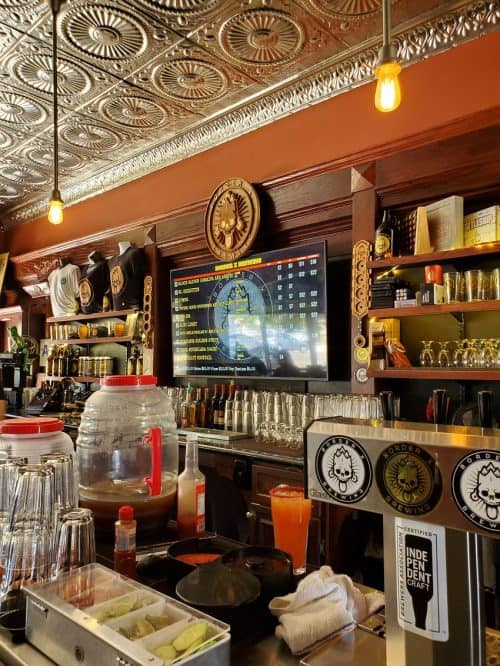 Owner David Favela told me he is pleased that the brewery is a place you can bring grandma as the family plays the Mexican version of bingo named Loteria and other amusing games. Out back in the patio is a favorite place to bring the kids and their pets while munching freshly made tacos and salsa made to order. No need to rush in a relaxing environment, live music just might cause you to relax a bit more.

For David, the sense of community is as important as the mighty brewski’s.

Art galleries dot Barrio Logan with one that is innovative and very popular. Bread & Salt gallery features artists’ exhibits and collaborative events to encourage the arts and outreach to the community. It’s well known to people in the local area, and out of towners are more than welcome to explore its vibrancy. This enormous property used to be home to Weber’s Bread factory in the 1930s and hence the name Bread & Salt. As I stepped inside the entrance, I saw the old bread making equipment and then walked within the flow of open rooms. Hanging art by visiting exhibitors donned the rooms with a quiet stillness with plenty of standing room to reflect. A fully stocked art studio with items you’d expect like brushes and an array of colorful paints are part of a collaborative outreach with La Jolla’s Athenaeum Art Center.

Owner and architect Jim Brown has eagerly utilized his vision to bring rotating art exhibits, interactive readings, sculptures, indie videos and music performers to the gallery for the public’s enjoyment. Renowned jazz artists’ performances and experimental arts have made this a very successful gathering place. Up and coming artists can apply for the art residency program to get their work recognized.  Most are free of charge. Check their website for the latest schedule. 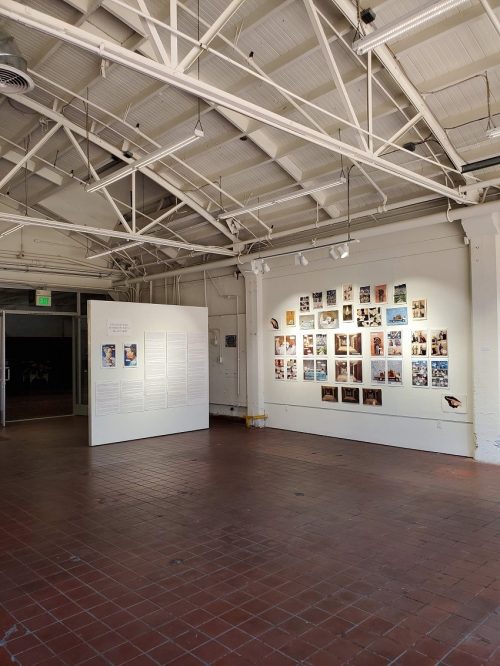 For eclectic shopping, stop in The Grand Artique 2244 Logan Avenue. If they’re not on the road setting up scenes for Burning Man or one of many festivals in the country, have a chat with owner Shane about how he acquires his variety of goods. Don’t be startled bumping into a Halloween like a skeleton or one of his treasured locking chests. The building used to be an abandoned church and Shane refurbished it, including the ceiling’s wooden beams, to house his business. He doesn’t want money for his collectibles, he wants to trade with customers. His philosophy is by trading, each person creates memories from a piece they traded for another collectible. Facebook and Instagram Grand Artique 2244 Logan Avenue, San Diego 619.200.3413 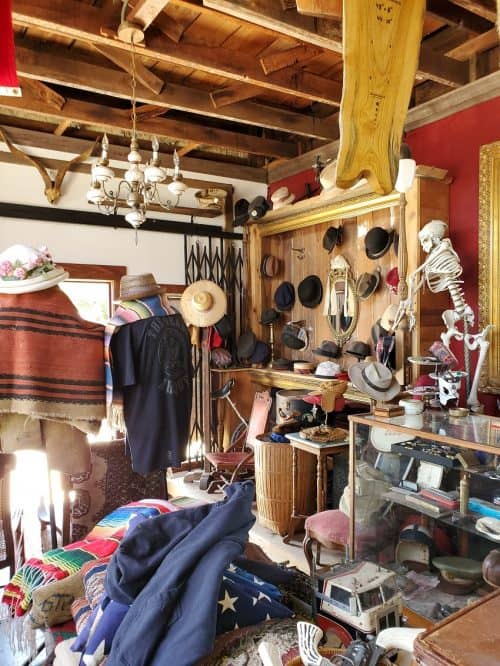 Treasures in The Grand Artique

Looking for old records? Head into Beatbox Records and peruse the collection of vintage LP albums, cassette tapes, and old posters. Owner Bernie Fishman prides himself on finding quality record collections and selling them to the public. His ear for music started when he was acquiring records as a teenager and then became a disc jockey. Bernie’s network of fellow record enthusiasts makes for treasured and hard to find records available in the shop. But, beware, you can spend hours flipping through the large assortments and reminiscing about that special song. As the beat goes on, he also has a keen eye for specific magazine collections and some memorable items. 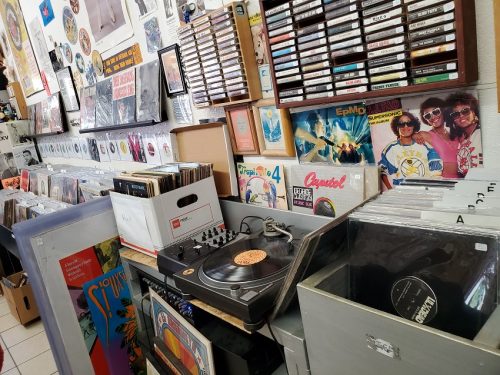 Hearing the music spinning from the store’s record player puts one in a good mood where the atmosphere is upbeat and nostalgic.

Local Por Vida coffee is well known on Logan Avenue for culturally inspired hot and cold drinks. Carolina Santana is full of the Barrio spirit and since opening the airy coffee shop, her business has expanded to include more community outreach. Carolina said much of her success is due to others who have helped her along the way. She is in the midst of setting up a coffee roasting section and installing a bean roasting system in her store. Colorful and spicy Sandia Limonada is an icy festive drink and the sage-infused chocolate and espresso Buenas Vibras latte are not to be missed. But I must confess, I couldn’t resist a Dulce de Leche latte. By the time I walked down the street, I felt like I had finished dessert and coffee in one cup. 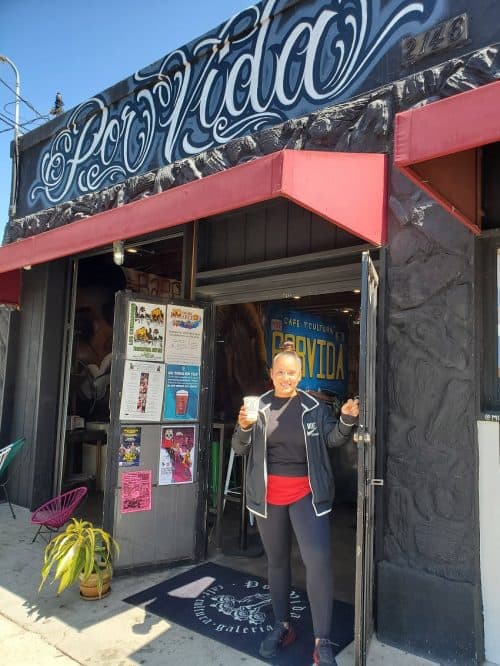 A wildly popular event on the second Saturday of the month is the Barrio Art Crawl which begins at 4 pm. You can participate in the free self-guided tour or a trolley shuttle offers free transportation from 5-9 pm. Eight designated stops swing around the art district. You can pick your stop and hop on whenever you like. Passengers are captivated by a third-generation local resident who narrates with an insider overview of the district.

A place to start the shuttle tour is at the Northgate Plaza. A Mercado with local vendors sets up early to sell cultural and intriguing items. Don’t miss the custom-designed tote bag give away to carry your goods throughout the evening. Music from the stage and food stalls add to the lively community event.

Hotels and other lodging are close to Barrio Logan in the nearby San Diego downtown and Gaslamp areas.

The San Diego skyline is within sight of Barrio Logan and San Diego International Airport is 5 miles away. Consider alternate transportation because of limited parking. Rideshare companies and the Metropolitan Transit System Trolley (Blue Line) are available.

Barrio Logan is continually changing with incoming independent businesses and restaurants. The streets are alive, especially in the evening with car shows, music festivals and many other community events.