Maybe it was the Marine Corp that taught Duke Windsor the discipline to finish over 25 hand-painted still life scenes in just a few months for a recent art exhibit. Or it could have been his love of painting in his studio and treading into some unfamiliar territory.

Born and raised in Texas, Windsor’s first job was at a Burger Chef restaurant. He enlisted in the U.S. Marine Corps and eventually became a combat illustrator and drill instructor.  Not one to sit still, he became an amateur rodeo cowboy as a bull rider. Then sang in an opera chorus and obtained a 4th-degree black belt in Kempo martial arts. What came next was his love of art.

Windsor pursued his passion for illustration as a freelance illustrator and explored painting with watercolors. His paint material by choice is acrylics, and he eventually found his niche using gold leaf applications among his paintings.  The illustrator believes gold leaf adds reflection and a different dimension to painted scenes.  He says, “[A] typical street scene becomes more alive by using gold leaf and causes people to look deeper into the painting.” 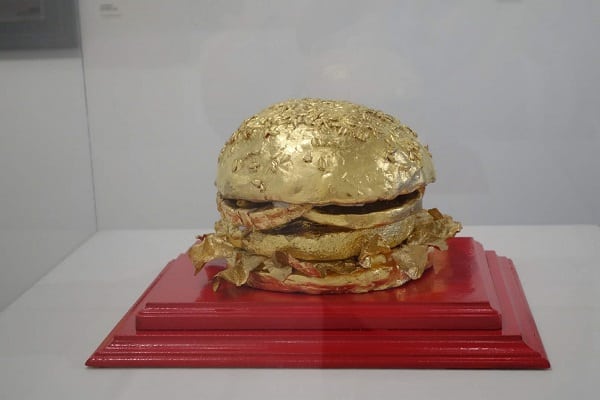 The Texas native often receives comments on how a painted street scene is seen in a totally different way by using gold leaf. When I saw his painting of an alley in an older area in San Diego, California, it immediately brought back memories of the area I once knew. That’s the beauty of his paintings.

A fine artist for over 20 years, he has taught numerous children and adults cartooning, drawing and painting for the past 15 years. Another way he gives back to the community is by donating his art to help worthy causes. His memberships include the California Art Club, Oil Painters of America and the International Acrylic Painters Association.

How Burgers Came to Be in His Collection

While teaching a class using produce and meat as an example of transforming stationery items into canvas, a student mentioned the setup “reminded him of a hamburger commercial.”  The comment got Windsor thinking about painting burgers using the art techniques he knows best —using acrylics and gold leaf.

In years past, Windsor says, “I became intrigued with the marketing ads of burgers and how the finished presentation was quite different from the tastes.” He sketched drawings of burgers and put them away to concentrate on street scenes, only to eventually find them and that is when he put his brush to the canvas. 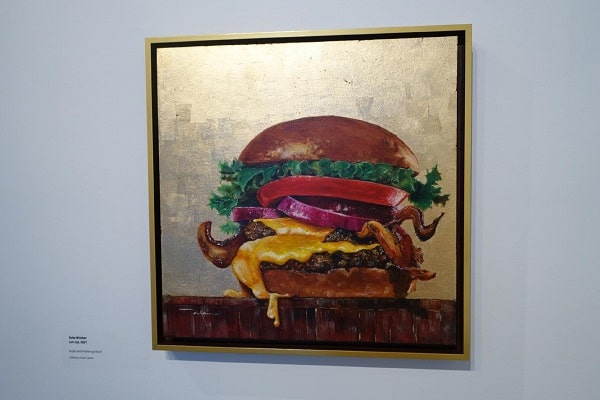 He also decided it was an opportunity to practice his sculpting skills by molding a burger with a gilded finish. San Diego Sparks Art Gallery, which frequently exhibits his non-food works, placed his first burger painting on display. The positive response was “a bit of a surprise,” he says.

Burger Paintings Take on a Life of Their Own

Shortly after, another museum, The Oceanside Museum of Art, approached him about being part of their local artists’ exhibition. Through collaborative talks, both the museum and Windsor agreed to an extensive display of burger paintings. For several months he painted, framed and cataloged one painting after another.

The 29 framed paintings filled two wings of the museum. His goal of how they made people feel after viewing was achieved as the paintings created “emotional reactions” in those who took a good look at the juicy details. And four of the paintings are vegetarian burgers which prompted the name of the exhibit, Duke Windsor: Nothing’s Impossible.  The exhibit ran from Nov 20, 2021 to March 13, 2022.

Windsor believes art has no limitations and the burgers were a different type of still life food painting.  He sees it as a “tongue and cheek” painting since burgers have changed from being simple and ordinary to upscale food. 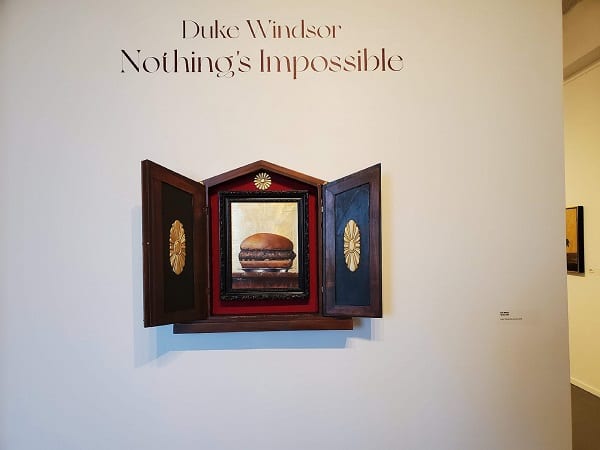 He has had more emotional feedback from the burger paintings than street work, and everyone sees it through their own eyes about the iconic food. The possibilities from the exhibit are the artwork could “inspire someone to become a chef or an artist,” says Windsor. One thing for sure, the reactions from visitors created a powerful craving for a hamburger.

Not being familiar with gold leaf, Windsor showed me how he used the material in the back of paintings. One burger had it smoothed out for the gold to reflect light and in another, the gold leaf looked like squares behind the burger. Windsor says, “It takes your eyes to see beyond the burgers.” The sculpture of his gold leaf burger in an enclosed case is a showstopper with each ingredient detailed in gold.

Windsor has more exhibitions on the horizon and says the concepts and ideas are ongoing and exploration of food in art will continue.  He is focusing on a traditional and modern series of still life to be named Baseball, Hotdog & Apple Pie. His dessert series will be My Gold Layer Chocolate Cake which is a dessert series paying homage to the late dessert artist Wayne Thiebaud.  “I even have an egg sunny side up series, and I will also be experimenting a bit with more food sculptures.”

Windsor’s next showing, Reverence, begins October 16 at Sparks Gallery in San Diego.  His paintings which are for sale can be found at https://sparksgallery.com/product-category/artist/duke-windsor