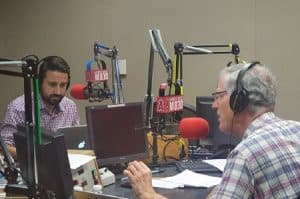 In the top observances for awards, there are the well-known Oscars and Emmy’s, with the Golden Foodie awards close behind. What are the Golden Foodie awards, you ask?  The awards began 4 years ago as a way to honor hard working chefs, superior restaurants and those who add their talents to make the Orange County food scene shine.  Categories include Best of ethnic restaurants, food writers, bar tenders and more. It’s a glitter filled event with chef jackets traded for tuxedos and bow ties.

The awards have attracted so much recognition that the co-hosts for the September 27, 2015 event will be Food Network celebrity Simon Majumdar and FYI Network Andrew Gruel. The awards are not new to Gruel, he was the 2013 winner for best seafood restaurant, Slapfish. Gruel’s concept for Slapfish is the fish has to be very fresh, from boat to plate.

A contender for this year’s Best Food Radio Show, is the Southern California Restaurant Show on AM 830 KLAA, the Anaheim Angels radio station. Believe it or not, people still listen to old time AM radio for their favorite talk shows and a chance to call in and express opinions. In this age of digital and preprogrammed shows, AM radio still offers much. I remember while growing up, one neighbor listened to baseball games on the radio while working in his garage and on a hot summer night each play could be heard for a block.  Looking back, it was his man cave before we knew the term and AM radio added a sense of comforting community.

Angels Radio is based at Anaheim Stadium with the Angel Baseball team owner Arte Moreno on site and hallways lined with baseball memorabilia. While I watched through glass panes into the radio station, of this powerful 50,000 watt station, the Southern California Restaurant Show had guests sitting around a table wearing headphones and speaking into positioned microphones discussing their specialties on air.  MJ Hong, proprietor of the Wine Artist in Lake Forest, offers services of private parties, weddings and cooking classes, along with boutique wines. Kean Artisan Coffee owner Martin Diedrich explained the love of his family’s coffee roasting history and brought in a container of his company’s ice coffee, steeped for 24 hours for the best flavor.  And Bobby Navarro from 100eats.com gave his thoughts about food trends such as new food halls opening and his company assisting with restaurant branding.

The beauty of live radio was the opportunity for celebrity chefs Carla Hall and Simon Majumdar to call in as show host and executive producer Andrew Harris engaged them in conversation. There was no 10 second “sound bite” or sticking to a strict format, the show flowed with personal exchanges cleverly painting a mental picture from descriptive interactions.

Harris has hosted the restaurant show for 3 years and his vast Los Angeles experience as a food and wine writer makes him a knowledgeable and articulate interviewer. Current obsessions with the culinary world makes the show timely.

A walk down the red carpet is appropriate and overdue for the culinary professionals who work long hours sharing their passion.  Voting for the Golden Foodie Awards is through August 7, 2015 at www.goldenfoodieawards/vote. Southern California Restaurant Show appears to be a good contender for this prestigious event.