This is an article written by a friend of mine; retired Sergeant, San Diego County Sheriff’s Department
and, Food/Travel Writer, M’liss Hinshaw. It is a great example of mentoring, featuring 2 San Diego Chefs.
Do we mentor in correctional food service? You bet your sweet petunia we do! One of the great benefits
of belonging to the ACFSA is the opportunity to receive and give mentoring from our peers, experts and
vendors. We bring it back to our departments where we continue mentoring our staff and of course, the inmates,
all contributing to a smooth and successful operation- Submitted By Louise Mathews, CFSM, CCFP

Mentoring is a process used to develop employees and youth in high school programs, and it has another
important place: in the culinary environment. The food world is tough enough by you as a rising chef or
restaurant owner. Mentoring can seriously make the difference for success. San Diego Chef Bernard Guillas
reached out to Chef Maeve Rochford as she progressed from cupcakes to the Food Network. Chef Maeve’s
business grew from 3 employees to 40 and much of her success was due to a professional chef mentor.

In a small 600 sq. ft. kitchen with one oven continuously turning out cupcakes and pies, Chef Maeve had a steady
stream of customers in her Pacific Beach Sugar and Scribe bakery. Being the owner, she baked, cleaned,
delivered goods and worked long hours to establish her business. In-between she sought media opportunities
to showcase her baked goods, especially around the holidays.

Then she had an unexpected conversation with a well-known French Master Chef and his offer to mentor her proved to be a pivotal point for the energetic chef. Chef Bernard Guillas had made his mark in the culinary world, and as the Executive Chef at San Diego’s fine dining restaurant, The Marine Room, he had plenty to share. Chef Maeve realized his valuable input could assist her small business and it was full steam ahead.
One of the first items he presented to her was budget and financial plans. Pleasing customers with delicious food
is only one aspect of a business. Customers love to rave about the food they had been served but recognizing the financial bottom line is another matter.

Chef Guillas told me he was taught by The Marine Rooms’ Food and Beverage Manager, John Campbell, about restaurant finances. His French culinary training had focused on sophisticated cooking and didn’t address behind the scenes business procedures. Across the board, experienced chefs agree, this crucial skill is not always taught in culinary training and must be
learned to run a successful business.

The two met regularly and important topics such as ordering supplies, scheduling employees and investing in the business were discussed. Chef Maeve did her best to implement what she learned while experiencing the good times and difficult times of owning a business.

Chef Maeve loves to replicate old family recipes, like her Irish soda bread, and came upon the idea to make an orange, cardamom and fig glaze. After developing it into a packaged product, Chef Guillas encouraged her to sell it at the local farmer’s market. Although she already had her brick and mortar store, she loaded up her jars and went to the farmer’s market. It turned out to be fortuitous.

She met the coordinator for the market, who in turn, arranged for her to meet a food writer. Sunset magazine visited her bakery and listed the shop as one of the 50 best places to eat. The article brought in droves of people searching to satisfy their cravings.

Later, she reached for another goal, that of being on the Food Network. By taking a risk and appearing on the Holiday Baking Championship series, she won the grand prize of $50,000. She shared the winnings with her employees because without them, her business would not be as successful.

Chef Maeve reflected on the many steps that have led to her accomplishments, hard work, networking and mentoring. She prides herself with passing this on to her employees. She firmly believes chefs need to educate their staff about their job duties and how it relates to the overall restaurant. Her employees are given the power to make suggestions and rewarded for
cost saving ideas.

Chef Maeve has had the joy of watching employees grow into lead positions by valuing them as people and passing on the benefits of mentoring.

The ability to mentor and be committed to see it through both by the chef and the mentee has far reaching aspects.
It’s a never-ending circle with the new kitchen staff gaining valuable lessons by those in the know and then passing it on when it’s the right time to mentor someone else.

Culinary training combined with mentoring is a winning combination. 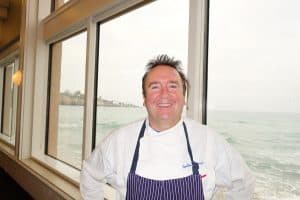 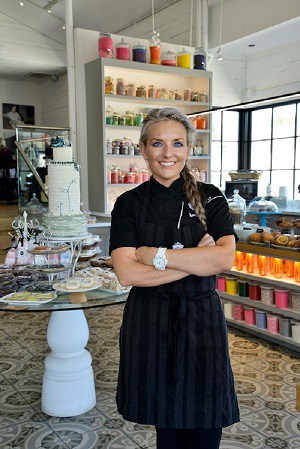 Tags: Chef Bernard Guillas, Chef Maeve Rochford, Sugar and Scribe, The Marine Room
Previous postOld Time BBQ for 70 Years Packs Them In Next postBaking Saved His Life – and Then Brought Him Love