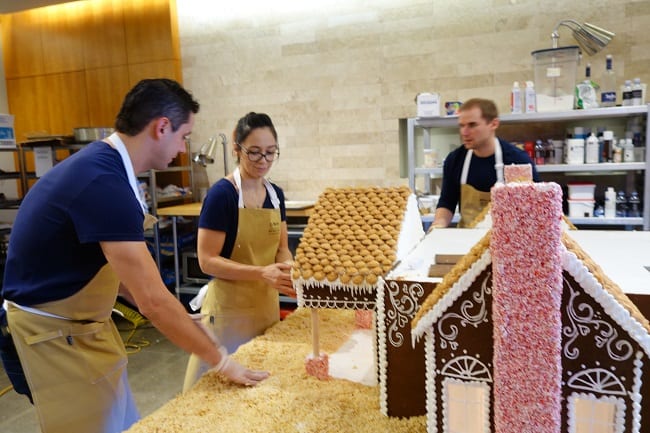 Just wait until Santa’s elves show off the magnificent nine-foot tall decorated tree at the Park Hyatt Aviara in Carlsbad, in the north part of San Diego County. The human elves are busily stacking, piping and contouring gingerbread, chocolate, and sugar icicles to make the fantasy tree. These three helpers are no ordinary assistants for Santa, they just happen to have recently won the Food Network’s Halloween Wars as Team Ghoul’d. Each has their own crafty skills, and jumped on board to work many hours for this most spectacular tree.

Executive pastry chef Christophe Rull received his culinary training in France and has won numerous awards for his chocolate showpieces; Liz Marek is an elaborate cake designer from Oregon; and Mike Brown from Missouri, is a top pumpkin carver – more like a sculptor. Now their winning talents have been reunited for the holiday splendor at this luxurious Carlsbad resort. 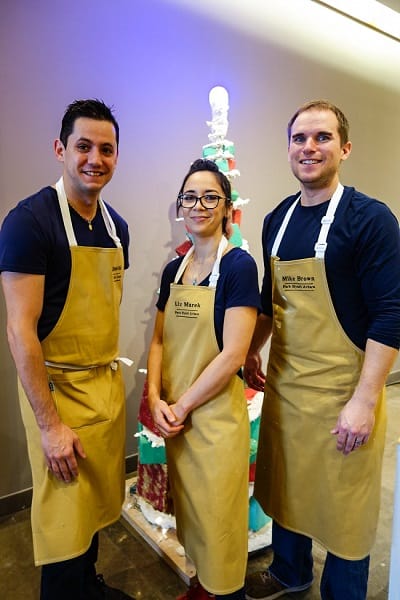 The Hotel’s Lobby will Present their Crafty Creation

The team work in harmony to prepare the tree which will be displayed in the front entrance of the lobby. Each concentrates on his or her own task, and in-between there is a bit of talk how to improve on the piece. Thankfully, it’s not near as stressful as producing winning Halloween creations for the TV show (though in the long run, that was worth it, as they walked away with the $50,000 prize money). This holiday production of long days and many hours to construct the chocolate tree will be a different type of prize.

Now Rull, Marek, and Brown busily mold and shape 50 pounds of chocolate, 40 pounds of modeling chocolate, 30 pounds of rice treats and 15 pounds of marshmallows. They let the fun of the season direct the tree design and all that goes with it. Santa’s workshop will have wrapped gifts and colorful ornaments. Months ago, they began designing the holiday display by sending sketches back and forth in messages. When they agreed on the concept, the resort knew this year’s display would be magical.

The Display is Free to See

Emily Koch, marketing manager for the resort, said locals and visitors can stop in and see the festival display for free. The hotel’s decorations will also include decking the halls with themed Christmas trees and wreaths to benefit the Semper Fi Fund.  I saw the trees last year and can say this year’s display is even more impressive.

Chef Rull told me he likes making creations such as this because it brings out emotions in people. Most people agree, it’s hard to look at the lights and colors of the season and not feel a sense of wonderment.

And when you bring the family for a photo in the lobby, look for the chocolate clock to keep track of time.

Nothing says the holidays like a tree reflecting the spirit of the season.

Revised from the original publication.