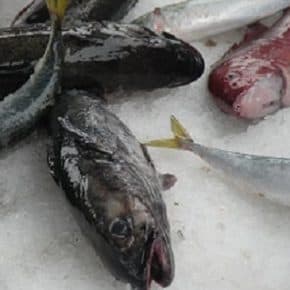 Fishing boats and especially tuna seiners, used to line up along the San Diego harbor and as they disappeared, became a memory for those old enough to remember them. Fast forward to today and San Diego is encouraging fishermen to troll the local waters and revive the fishing community it once was.

An open air fish market near Seaport Village and right on the pier at Tuna Harbor, will allow fishermen to sell freshly caught fish from their boats and directly to customers. The excited word spread quickly about the pop ups selling varieties of whole fish such as Bluefin tuna and rock cod with other possibilities like crab to be added later. People waited in a long line to buy at reasonable prices and those making a purchase were pleased with the soon to become dinner.

County Supervisor Greg Cox of the First District, told me there is a strong demand for sustainable and healthy fish to be provided by local purveyors and sold to the public. As Cox sees it, this could spur interests in local fishing once again and serve the public positively.

Port of San Diego Commissioner and Chairman Bob Nelson remembers the local fishing industry years ago and believes this new outreach will lessen the need to buy frozen and packaged fish.

Fish monger standards serve to tell the freshness of a fish by seeing how clear the eyes are and how fresh the smell is. From the looks of these fish, they were looking at me with clear eyes.

The open air market will be every Saturday 8 a.m. to 2 p.m. or when sold out.