What do food justice and fish have in common?  Plenty.  San Diego, California, with its postcard beaches, has an underserved Black Indigenous People of Color (BIPOC) population in an older part of the city, and a coordinated project is serving this group from the sea to the community.

Project New Village, a non-profit located in San Diego’s Mt. Hope area, began years ago with a community garden for residents.  Setbacks like the COVID-19 pandemic closed the garden and changed its direction in many positive ways.

Managing director N. Dian Moss explains that the garden is in the area’s “food desert.”  The residential area has no community grocery store and is anchored by two big box stores. Shopping for fresh foods to make meals at home is difficult.  The organization has a “focus on food justice” and is in the beginning stages of development. Moss lives close by and has a passion for her community.

During the shutdown, local fishermen had an abundance of fish not being sold to shuttered restaurants. Many creative ways were sought to use the fish and thanks to various grants, the fishing community collaborated with chefs and prepared cooked meals using zero waste practices to create Fish to Families. Project New Village became one of the Fish to Families outlets.

These eco-friendly meals contain cooked fish from local waters as well as other sustainable fish options such as salmon. The fish courses are paired with side dishes.  It seems like such a simple idea, but some residents who didn’t eat the protein regularly were unfamiliar with different types of fish being offered in the meals.

To explain the fish, a handout is given listing the types that are locally caught.  Also included are pictures about fishing methods and which local fishing families are providing the catch.  Individual containers hold the fish of the week along with nutritious items such as heirloom beans and carrots. The side dishes change to complement each fish selection.

Area residents can pick up the meals on Thursdays between 4 p.m.- 6 p.m.; there are enough containers for 80 people.  Moss tells me if someone is housebound, they will find a way to deliver the meal.  The feedback from the community has been positive as they eat different fish they have not tried before.

Project New Village is active in the Good Food District and is striving to bring more food sources to the property.  Moss plans to have a “shopping hub” where neighbors will be encouraged to bring their homegrown produce to trade with others.

As I walked the big community garden lot on a Thursday, a produce stand sold a bounty of organic greens and citrus grown in the rich soils.  A woman scooped up bunches of beets with luscious green leaves and carried them out in a brown paper bag. This would not be available to her had it not been for the community garden.

Progress is in the works for Project New Village

Many of San Diego’s neighborhoods have been transformed into modern urban developments, yet Mt. Hope has remained forgotten.

When the garden parcel went on the real estate market in 2019, community efforts sought to buy it.  Through a loan from The Conservation Fund, the property was purchased by Project New Village.  Preserving green space and facilitating the community’s specific needs are at the core of the non-profit’s mission.

A dedicated team of volunteers tilled the weeds which had lain dormant and now grow lively collard greens, plants, and apricot trees.  Revitalization of the grounds even involved changing city ordinances to allow public growing spaces.

Teaching the youth to grow their own food is at the forefront by providing master gardeners to lend a hand.  Owning the one-third acre adds a commitment to providing many services to the community.

Moss says feasibility studies are being conducted to build a four-story building to house a small grocery store, office space, fitness classrooms and senior housing.  Fundraisers are underway to accomplish some of the goals to be “self-reliant,” according to Moss.  Wellness and nutrition are always at the forefront of the evolving organization. 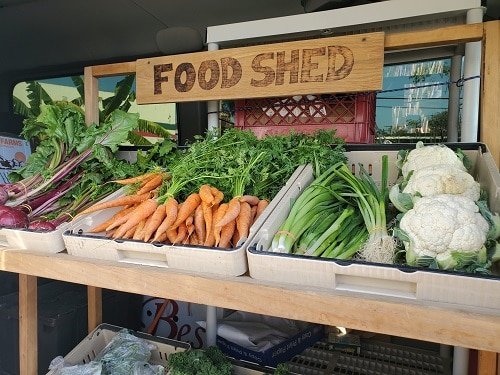 The community-based organization keeps moving forward by working with many agencies and programs to ensure the residents have what they need. Their recent grant for a Black-owned business was awarded by The Kresge Foundation led by the Equitable Food Oriented Development, a strategy that uses food and agriculture to encourage healthy neighborhoods.

Moss keeps on the move with a virtual fundraising dinner during Black History Month, being honored during Women’s History Month, hosting the San Diego Architectural Foundation open house, and squeezing in a community vaccination day.

Following on social media is a must for this active grassroots group. Frequently offered zoom and Facebook seminars keep people updated on the property’s activities.

The organization is continually tapping into its potential by bringing residents together for fish dinners and getting to know one another on their neighborhood grounds.

This fish story, unlike typical fish tales, has a lasting impact on people’s lives. 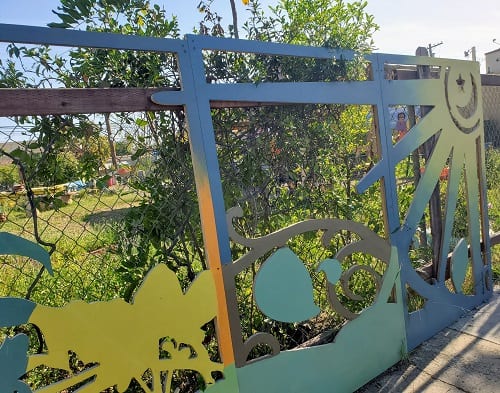