The Mission Inn, a Storied History in Riverside Calif

I had heard about the magical holiday displays at The Mission Inn and they were a must see, but I visited in the middle of the summer to get a look at the inn.

How It All Began

Riverside, California, was home to a colony of healthy people who tried mightily to grow crops until they hit on the right one, the navel orange. The orange crop blossomed and waterways, trains and lodging helped develop this Southern California area 60 miles east of Los Angeles. Hollywood stars and wealthy tourists vacationed here where Spanish Renaissance buildings, sunshine and swaying palm trees abound. Mission Inn owner Frank Miller marketed all this along with the popular California Missions to bring in visitors. 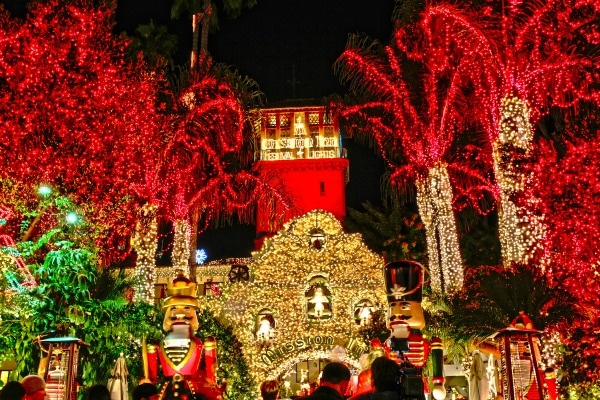 Mr. Miller used his social influences and wealth to expand the property and host well known dignitaries and presidents.  It was not unusual for him to acquire treasures from his world travels and decorate the Inn with them; or build a section of the hotel to put the ornaments on exhibit. His wife Isabella (Bella) loved bells and 800 bells are in the collection with many on display. Near the entrance is a 3500 pound bell named the Nanjing Bell which can’t be missed. 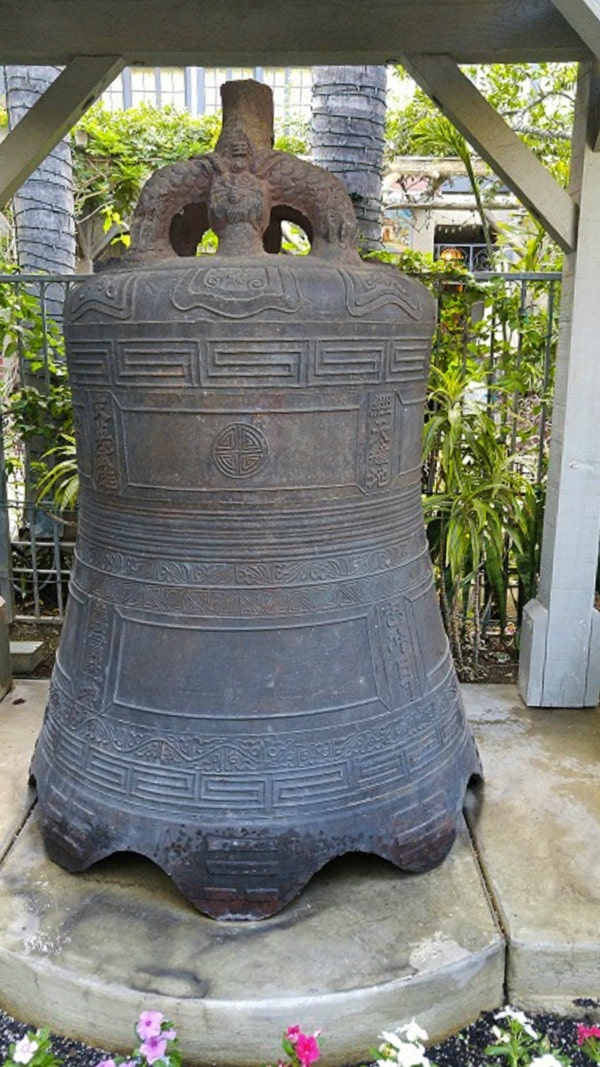 Resembling the design of a mission, guests enter through an arched entrance with hanging bells in the wall known as a campanario or bell wall.  From there, the intrigue begins as the Inn takes twists andturns in an unusual manner. Buildings and wings were added one at a time and not in a fluid way.

One of the impressive additions is the International Rotunda Wing completed in 1931. The storied spiral staircase ascending multi-levels has wrought iron hand rails and tile insets of various countries’ insignias. Here, Booker T. Washington visited and dined with Mr. Miller during his social reform speeches. President John F. Kennedy, prior to his time in office, attended the Institute of World Affairs conference. 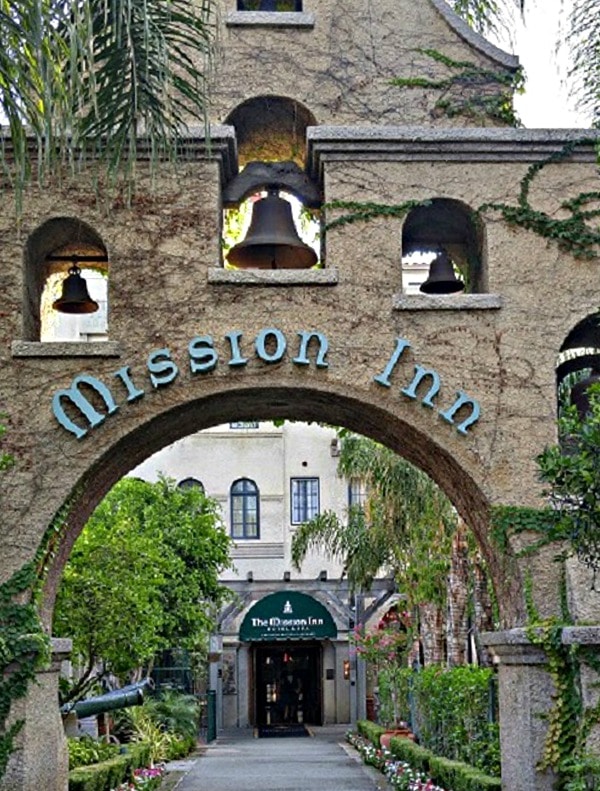 One level leads to the Courtyard of the Orient and the other to the St. Francis of Assisi Chapel. The chapel is lined with Tiffany stained glass windows, Belgian wooden benches and a massive gold-leafed alter.  300 weddings are held each year and Bette Davis was among the notables who were married in the chapel. While most were in awe of the Rayas alter, I noticed a woman behind me glancing to the back of the chapel. Her eyes were on the pipe organ above the door and being a professional organist, she thought it would be a thrill to play it. 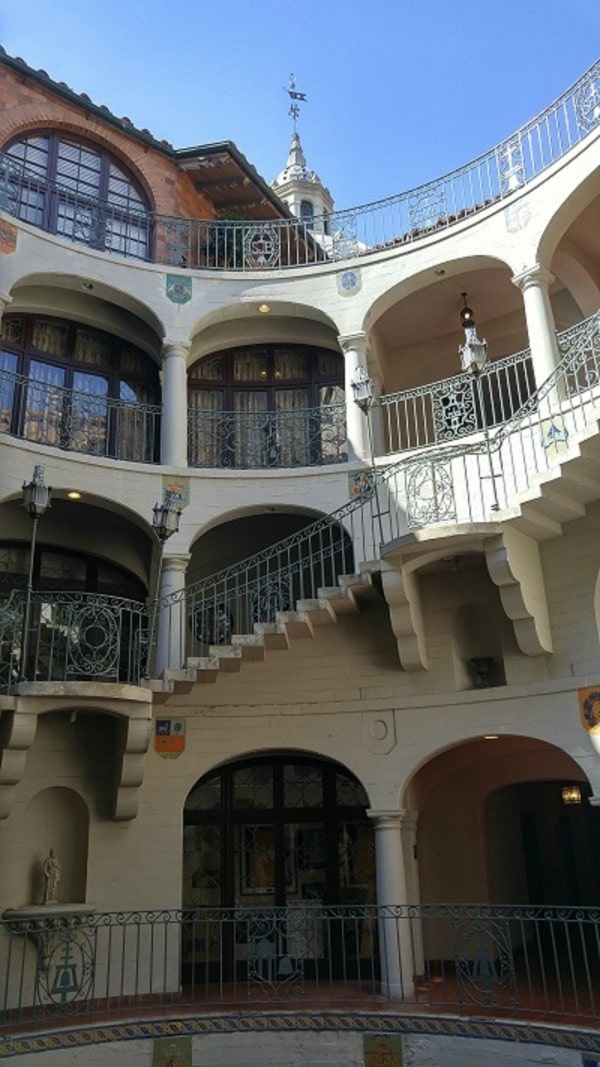 The Many Designs of The Buildings

Additional wings were added to the hotel in stages including a Cloister wing with catacombs, Spanish wing with outdoor courtyard and Author’s Row. Each level has very different guest accommodations. Gazing in any direction reveals much design uniqueness:  a Moorish style roof on one wing, gargoyles and turrets on another and a glockenspiel (clock tower). When the clock chimes every 15 minutes, full size statutes of Father Junipero Serra, Juan Bautista de Anza, St. Francis of Assisi, a grizzly bear and a Native American appear in rotation.

The best way to explore the property is on an hour tour which will only illustrate the tip of the iceberg. Volunteers in the museum arrange tours with knowledgeable people who love The Mission Inn and are able to answer any questions. The tour is very interesting. 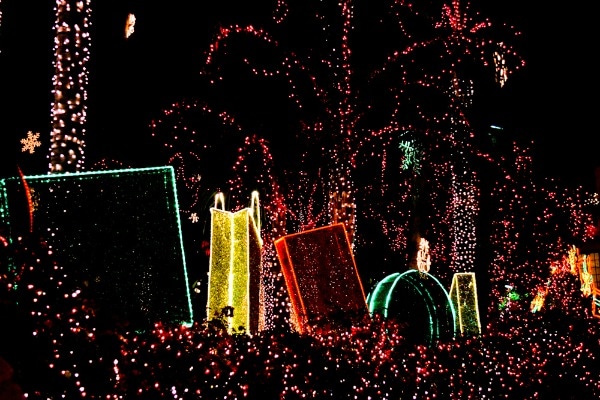 Holidays are the most festive time with 4 million lights and 400 animated figures throughout the property.  Honestly, anytime is a good time to visit The Inn.